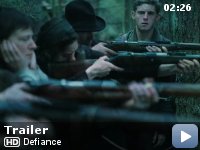 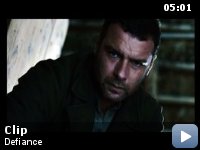 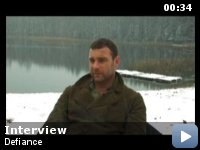 Jewish brothers in Nazi-occupied Eastern Europe escape into the Belarussian forests, where they join Russian resistance fighters and endeavor to build a village in order to protect themselves and about 1,000 Jewish non-combatants.

Storyline
On the run and hiding in the deep forests of the then German occupied Poland and Belorussia (World War II), the four Bielski brothers find the impossible task of foraging for food and weapons for their survival. They live, not only with the fear of discovery, contending with neighboring Soviet partisans and knowing whom to trust but also take the responsibility of looking after a large mass of fleeing Polish Jews from the German war machine. Women, men, children, the elderly and the young alike are all hiding in makeshift homes in the dark, cold and unforgiving forests in the darkest times of German occupied Eastern Europe.

Taglines:
Freedom begins with an act of defiance!

The makers considered shooting in Poland and Romania before settling upon Lithuania.

Errors made by characters (possibly deliberate errors by the filmmakers):
During the wedding scene, the rabbi says this line in Hebrew: "Haray at mekudeshet lee beh-taba'at zo keh-dat Moshe veh-Yisrael," which translates as "Behold, you are consecrated to me with this ring according to the laws of Moses and Israel." A rabbi would have said this line minus the word "lee", meaning "to me", and then the groom would repeat the line adding in the word "lee". Otherwise it is if the rabbi was the one that got married to the bride.

Tuvia Bielski:
We're family. We have to stick together.

Saw a preview screening of DEFIANCE last week in Woodland Hills. Daniel
Craig stars as Tuvia Bielski in the true WWII story of three Jewish
brothers who hid in the Belorussian forests and built a community of
partisan fighters, saving over 1200 Jews by war's end.

Liev Schreiber (Zus Bielski) and Jamie Bell (Asael Bielski) star
alongside Craig as his two younger brothers. Both Craig and Schreiber
give powerhouse performances as the older brothers competing for
leadership, and Jamie Bell, who most recently starred in the abysmal
Jumper, gives a surprisingly great performance as well.

Zwick has created one of the most beautiful and thought provoking films
of his career and definitely one of the most Oscar worthy movies to hit
cinemas in years. War and destruction has never been so captivating and
moving. There have been dozens of war movies in recent years but none
have left me caring so much or feeling so attached to the characters.
My eyeballs wouldn't break from the screen for the full 120 mins, and
by the film's end, I wasn't ready to stop watching. I can't wait for
the release (which appears to be some time this winter) in order to see
it again.

It's a superb film with a nice balance of heavy hitting action and
intense drama, but if that's not enough to make you want to see it,
just the fact that these on screen heroes existed in real life
definitely make it worth the watch.

This is a WWII movie that doesn't hide or glamorize war but shows the
intense reality of what happens when people band together against
overwhelming evil and survive.