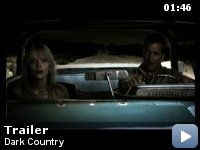 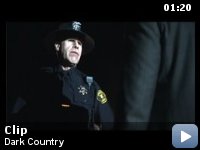 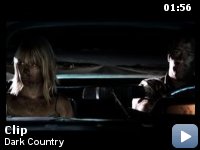 A couple en route from Las Vegas are forced to deal with a body out in the desert making their honeymoon one hellish ride.

Storyline
A couple en route from Las Vegas are forced to deal with a body out in the desert making their honeymoon one hellish ride.

Taglines:
At the End of the Road… The Nightmare Begins

Continuity:
When Dick runs the old Dodge off the road the first time, the left front tire runs deep into the sand. In the next shot, the tire isn't sunk at all.

Brave story telling, but not a film for everyone.


The first thing you will notice about this movie is it's style. It
takes a few minutes to get used to the pseudo-film noire feel and the
interesting camera work. In the end you may feel as though you've been
watching an episode of The Twilight Zone, or Tales From the Dark Side.
Welcome this feeling- it is the only way to really embrace the computer
enhanced darkness that fills this movie.

For the most part the acting is solid. Thomas Jane is pulling double
duty as both lead actor and director, a difficult task for anyone
(watch almost any Branagh film), and in this case it works. You can
tell he feels very comfortable working with his surroundings, co-stars
and cameras. Lauren German never really seems to find her stride in
this movie but I'm willing to blame the writer for never making any
very solid decisions as to her character. And Ron Perlman is just sort
of there, being Ron Perlman. Which is fine, if you like Ron Perlman.

The music isn't the best but what was written for the movie works well
within the movie. If the computer enhanced darkness and story don't
throw you off, the music isn't going to be the straw that breaks the
camel's back.

I have a soft spot for this kind of film- indie-esquire, first time
director, interesting story with certain, almost inexplicable, twists
that are almost nuanced into the shots. I like this movie, but it's
probably not going to appeal to the masses. If you want a big budget
scary movie with Thomas Jane and a satisfying ending that wraps up all
events in the movie into a nice little explained bow, rent The Mist. If
you want something a little more offbeat with a unique vision from a
first time director, try Dark Country.

TagsUSA
An Education
The Descent: Part 2