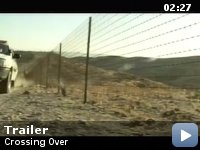 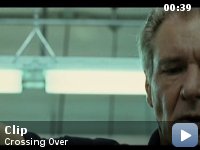 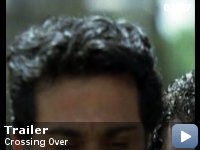 Storyline
Crossing Over is a multi-character canvas about immigrants of different nationalities struggling to achieve legal status in Los Angeles. The film deals with the border, document fraud, the asylum and green card process, work-site enforcement, naturalization, the office of counter terrorism and the clash of cultures.

Taglines:
Every day thousands of people illegally cross our borders… only one thing stands in their way. America.

Factual errors:
In Gavin's interview scene, the immigration officer relies on the Rabbi's opinion. The garb and the accent of the Rabbi suggest he is a European Orthodox (probably Lubavich), yet in the end he gives Gavin a card, saying he should come to Temple Bet Sholom. "Temple Bet Sholom" is typically a name for splinter Reform congregations, whose rabbis are mostly American- or Canadian-born (therefore no accent), and wear contemporary clothes.

Special Agent Howell:
You see what's interesting Miss Shepard is we ran a check on your name. A Claire Shepard arrived on a B-2 visitors visa seven months ago and then just two days ago she has her status adjusted to an EB-1 green card for persons of extraordinary ability. According to The Internet Movie Database, the only Claire Shepard that matches your spelling, age and place of birth has two credits on little known Aussie TV shows. Walk on roles. She hasn't won any national or international awards

Special Agent Ludwig:
Which is something the adjudicator who handled your case would have to have been aware of and yet he approved you for an EB-1. Miss Shepard we'd like you to tell us about your relationship with center adjudications officer Cole Frankel?


This ensemble multi-ethnic cast turns in solid performances in this
formulaic treatment of the everyday dramas faced by the hard working
folks at Immigration and Customs Enforcement. Mexican, Chinese,
Palestinian, Australian and Persian plots carom off each other like
Olympic Billiards as Harrison Ford, (whose obviously impending
retirement is thankfully never mentioned), his heart bleeding from
frame one to the credits, leads a solitary existence in an apartment at
what has to be the Alimony Arms Hotel. There is no attempt to patch
over the Crash/Babel formula; the film embraces it and comes up with
some fine set pieces like a gripping intervention (Cliff Curtis and
Justin Chon) during a convenience store robbery/shootout. The aerial
views of L.A. will make natives want to freeze-frame future DVDs to ID
where we are. The climax (NO SPOILER) is played against an attenuated
rendering of the National Anthem and packs a punch. Unfortunately,
there has to be another five minutes of Tying Up Loose Ends. Does it
sound like I didn't like this much? On the contrary, it was 113 minutes
well spent and shouldn't have been relegated to the Purgatory of
February. April, maybe?

TagsUSA
Fired Up!
The Girl with the Dragon Tattoo