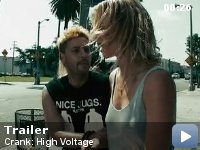 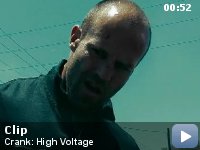 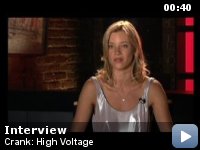 Chelios faces a Chinese mobster who has stolen his nearly indestructible heart and replaced it with a battery-powered ticker that requires regular jolts of electricity to keep working.

Storyline
Chev Chelios survives a fall from the sky, sort of. He's in an unknown location, sedated, while various Chinese are harvesting his organs. His heart is gone, in an ice chest; a temporary in its place. Chev escapes, knowing only the name of the guy with the ice chest. He calls Doc Miles, an unlicensed cardiologist, who tells him there's only an hour's life in the artificial heart: keep it charged. Chev needs to find his own heart and get to Doc for a transplant. He starts his time-limited pursuit of shadowy figures, the ice chest, and his heart aided by Eve, Rei, and Venus – a stripper, a prostitute, and a pal with Tourette's – constantly needing an electric charge to keep going.

Cameo:
[Maynard James Keenan]
The man with the control to the electric shock collar is the lead singer of prog-metal band Tool.

Revealing mistakes:
When the paramedic stands up in the therapist's office, even before he gets hit by the bullet, you can see a small black hole on the side of his head, clearly showing where the CGI blood/bullet impact is supposed to be.

Johnny Vang:
You can't look in that box!

In short, I liked it.


Really this movie is a grind house movie in an era where grind house
movies don't exist. It has everything that is unacceptable as
entertainment in other movies…and yet you can't stop watching. It's
for the most part, balls to the walls, insanity. It doesn't make sense.
The reason I don't' mind…is that it's not trying to. It knows it's
stupid and crazy. And it loves it. It's not trying to impress you. This
is a movie that really took control of itself. Typically you'll have a
movie with an a-b formula…this is a a-z formula with complete
insanity and randomness filling in the interval. You know where the
movie is going as soon as you start watching it, it's the ride that
excites and keeps you watching.

In short, this movie has violence, action, nudity, homosexuality,
disabilities, public indecency and racism. And I have to admit, I liked
it.

The one problem I had with this movie is it started so crazy and
hilarious that it kind of peaked in the middle. It was just so much
that the rest didn't surprise you anymore. I still found it very
enjoyable though, and would definitely add it to my collection.

Also I know this review sucks, but this movie is hard to give a serious
review to. If you like movies that play out like a GTA video game mixed
with a violent Japanese film…then watch it. Just have fun with it.