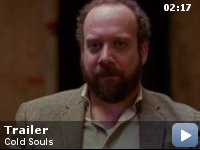 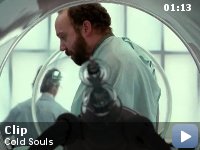 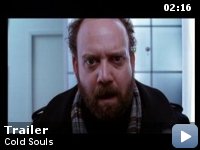 Paul is an actor who feels bogged down by his participation in a production of Chekov's play, Vanya.

Storyline
Civilization and its discontents. Paul, an actor preparing for "Uncle Vanya" on Broadway, is mired in ennui. His agent tells him about an office where he can put his soul in storage. He does so then discovers that being soulless helps neither his acting nor his marriage; he returns to the office and rents, for two weeks, the soul of a Russian poet. His acting improves, but his wife finds him different, he sees bits of the borrowed soul's life, and he's now deep in sorrow. He wants his own soul back, but there are complications: it's in St. Petersburg. With the help of Nina, a Russian who transports souls to the U.S., he determines to get it back. Who has he become?

The film was inspired by a dream in which Woody Allen discovers that his soul looks just like a chickpea.

Incorrectly regarded as goofs:
Dmitri tells the actress not to worry that Paul's soul looks like and is the size of a chickpea, telling her that Al Pacino won three Oscars. Al Pacino has actually only won one Oscar (Best Actor in 1992, Scent of a Woman).


I saw this film today as part of FSLC and MoMA's New Directors / New
Films Festival. The screening was followed by a Q&A with
writer/director Sophie Barthes, who openly admitted to being annoyed by
comparisons between her film and Charlie Kaufman's works. Though not
entirely similar, the surrealist feel of 'Souls' is bound to draw those
comparisons, and even if Barthes is sick of hearing it, I have to say,
I imagine that if Kaufman and Anton Chekhov decided they should write a
movie together and Michel Gondry agreed to direct Paul Giamatti in it,
this would be the result.

The film focuses on Giamatti, who plays a version of himself preparing
to star in Chekhov's 'Uncle Vanya' on Broadway. He finds himself
tormented by the Russian material, even though it's one of Chekhov's
"lighter" plays. In search of relief, he undergoes a procedure in what
looks like a modded MRI machine at the hand of Dr. Flintstein (David
Strathairn) which removes his chickpea-like soul from his body and
freezes it temporarily until he is ready to possess it again. The B
story follows a willowy Russian named Nina (Dina Korzun) who transports
anonymously donated Russian souls to America using her own body as the
vessel. At one point, she takes Giamatti's soul to Russia, where her
boss's soap-actress wife is in need of talent and inspiration, and of
course, trouble ensues.

Despite the heavy subject matter, an abundance of absurdity and wit
make 'Cold Souls' amusing as well as thought-provoking. Though the tone
is dark, it is not suffocatingly so–Barthes pokes fun at existential
torment while seriously grappling with it at the same time. Giamatti is
great as the "actor much like himself" and Strathairn and Korzun
provide excellent support. The camera drifts in and out of focus in a
beautiful manner throughout the film, and the French music suits the
mood. The writing is solid, though the pacing is a little uneven–the
film begins and wraps up a little too quickly–and the three years of
hard work that Barthes poured into this clearly show.

Barthes said that she based the screenplay on a dream she had, and that
while she admires Kaufman, she was more heavily influenced by Woody
Allen and French Surrealists like Luis Buneal. She has infused this
dark Surrealism with whimsy and absurdism to create something entirely
her own, and the result prompts both pleasure and discomfort. 'Cold
Souls' is definitely worth watching–I hope it's distributed as widely
as it deserves to be–and Barthes is definitely a writer and director
I'd watch in the future.

TagsUSA
The Boys Are Back
The Yellow Handkerchief