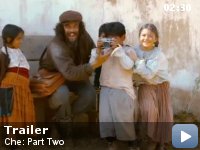 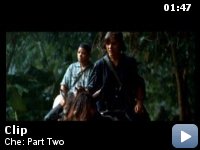 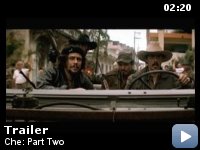 Storyline
In 1965, Ernesto 'Che' Guevara resigns from his Cuban government posts to secretly make his latest attempt to spread the revolution in Bolivia. After arriving in La Paz, Bolivia late in 1966, by 1967, Che with several Cuban volunteers, have raised a small guerrilla army to take on the militarist Bolivian movement. However, Che must face grim realities about his few troops and supplies, his failing health, and a local population who largely does not share his idealistic aspirations. As the US supported Bolivian army prepares to defeat him, Che and his beleaguered force struggle against the increasingly hopeless odds.

Che: Part One and this film were screened combined at the Cannes Film festival 2008 under the title "Che".

Revealing mistakes:
When the Bolivian troops are about to ambush the guerrillas crossing the river, you can see, that the machine guns belt is holding bullets with primers that have already being fired. The firing pin imprint on the cap is clearly visible.

Ernesto Che Guevara:
To survive here, to win… you have to live as if you've already died.

Notes From An Argentinean plus a Personal Confession


I love cinema so what I'm about to confess embarrasses me deeply. I had
given a thumbs down to "Che, Parts 1 and 2" without having seen the
film. Terrible I know. But I felt into a trap perpetrated by…who? I
don't really know but there has been a negative word of mouth that
spread like wild fire and, no matter how smart I think I am, I fell
into it. But, thankfully, I bumped into an Argeninean film director,
Martin Donovan, a man I love and admire. When I told him I wasn't going
to see it because I knew the film was a failure he looked at me as if
he was ready to punch me right on the face and Donovan is a pacifist!
He took me aside and told me how much he loved the film and why. I went
to see both parts straight away and, "Che, part 1 and 2" is the best
film I've seen in 2008. It is, of such purity that it will remind you
of the work of some of the great masters of the past. The regard for
its audience is something that we're not used to anymore. I don't know
if we ever were. Riveting, moving, without concessions and Benicio del
Toro is just extraordinary. We can see his soul, we can actually
perceive it. The humanity of the man is overwhelming. So, thank you
Martin Donovan once again for educating me so honestly. Bravo Del Toro,
Bravo Soderbergh and everyone involved in this landmark film. Don't
commit the mistake I was about to commit. Go see it, now, on the big
screen