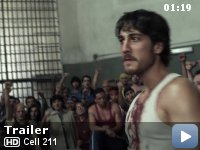 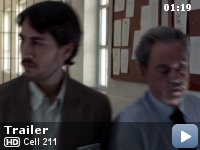 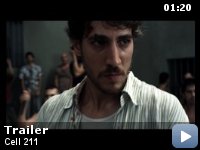 The story of two men on different sides of a prison riot — the inmate leading the rebellion and the young guard trapped in the revolt, who poses as a prisoner in a desperate attempt to survive the ordeal.

Storyline
Juan Oliver wants to make a good impression at his new job as a prison officer and reports to work a day early, leaving his pregnant wife, Elena, at home. His destiny is forever changed by this fateful decision, as during his tour of the prison, an accident occurs that knocks him unconscious. He is rushed to the empty but visibly haunted walls of cell 211. As this diversion unfolds, inmates of the high security cell block strategically break free and hijack the penitentiary. Aware of the violence that is to come, the prison officers flee, leaving Juan stranded and unconscious in the heart of the riot. When Juan awakens, he immediately takes stock of the situation; in order to survive, he must pretend to be a prisoner. Juan develops a dialogue with the violent leader of the riot, Badass, and the two begin a partnership, Badass fully believing that Juan is a new inmate. Negotiations go smoothly…

The movie is dedicated to 'Luis Ángel Puente', a fireman of the city of Zamora (Spain) where the film is located. He participated in the film and died rescuing two boys in the Duero river shortly after.


This is a great movie mainly for two reasons:

1. The script is not a typical Hollywood storyline. It's very realistic
and powerful.

2. The performances of all actors are superb. In contrast to Hollywood
movies, the actors in this movie are not models who decided to move to
the film business but real actors.

Fortunately, there are still cinema people who do not see movies as
commercial products for sale with the purpose of bringing enormous
profit to the producers but rather works of art. There is still hope
for cinema.