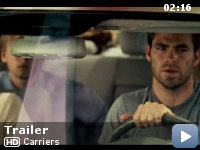 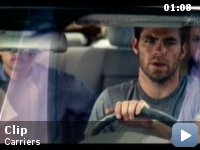 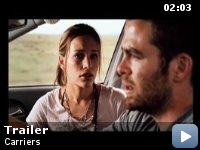 Four friends fleeing a viral pandemic soon learn they are more dangerous than any virus.

Storyline
In a world devastated by an outbreak, Brian, his girlfriend Bobby, his brother Danny and their friend, Kate, are heading to a beach where the brothers spent their childhood vacations expecting it to be a sanctuary. When their car breaks down on the road in the desert, they negotiate with a man called Frank, who is also stranded but without gas. He is trying to get his daughter Jodie to the hospital (she is infected with a disease of some kind), they all decide to travel together. During the journey, massive moral dilemmas arise, as events head into a downward spiral.

Taglines:
The rules are simple. You break them, you die…

Continuity:
After driving around the SUV blocking the road, the Mercedes is seen spilling oil on the road. When they go back to the SUV the road is shown and it's clean.


It's hard for me to precisely categorize this movie. Drama? Sure.
Thriller? For sure. Horror? Mmm, I don't think so. It's funny, because
it's hard not to label the movie horror, seeing as how it deals with a
grotesque infection, that spreads worldwide terror and brings
civilization to its knees. However, the infected aren't the antagonists
here. Once you've been infected, you're basically already dead.

Ultimately I thoroughly enjoyed the movie. After reading other comments
here, it seems the general consensus is that the pace is too sluggish.
I'd have to agree that it was a long 90 minutes, but as someone who is
prone to falling asleep during movies, especially after an 8 hour
shift, my interest was effortlessly sustained throughout the movie.

The production values here are top notch. I was never bothered by bad
acting (or at least too bad). The cast fit my tastes, maybe only
falling short with Piper Perabo, but that would only be nit-picking.
The photography wasn't jaw-dropping, or even slightly innovative, but
it was still more than adequate.

What actually impressed me most was the writing. There are some real
gems in there, but mentioning them would be spoiling some great scenes.
I seemed to sense some anti-religious or religious undertones, however
I honestly can't decide which. I suppose that's what I liked so much
about it, the morality was left quite vague.

Anyway, a solid effort. It's possibly lacking some more gore, and
action, but that also could have just made it tasteless. I would
recommend this to anyone who's a fan of biological horror, but I'd say
ultimately you should see it for the story, and not the action.

TagsUSA
Halloween II
My One and Only