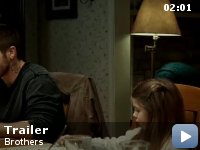 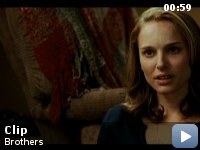 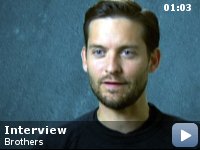 A young man comforts his older brother's wife and children after he goes missing in Afghanistan.

Storyline
Before leaving on his second tour in Afghanistan, Marine Captain Sam Cahill, a leader, an athlete, a good husband and father, welcomes his screw-up brother Tommy home from prison. He'd robbed a bank. In country, Sam's helicopter is shot down and all are presumed dead. Back home, while Sam wastes away as a prisoner in a remote encampment, Tommy tries to take care of the widow and her two children. While imprisoned, Sam experiences horrors unbearable, so when he's rescued and returns home, he's silent, detached, without affect, and he's convinced his wife and brother have slept together. Demons of war possess him; what will silence them?

Taglines:
There are two sides to every family

Carey Mulligan mentioned in an interview at the Sundance Festival that she got the role after sending an audition tape to America; when they shot her scenes, it was at about 3.00am, and it was largely improvised (something she enjoyed). She called it a "trial by fire".

Maggie Cahill:
Hey! No drinking out of the carton. It's gross.

Tommy Cahill:
Shut up. You're gross.

Did anyone know that Tobey could act?


What drew me to this movie was the cast of Jake Gyllenhaal and Natalie
Portman, two phenomenal actors in their own regards. The only
expectation that I had going into see this film was that I would be
unimpressed by Tobey Maguire. Having seen him in several films
(including Spider-Man), I must say that I wasn't prepared for the
incredible performance he provided.

This movie was very simplistic. Nothing flashy, no real special
effects, small amounts of simple guitar music as a soundtrack. But it
conveyed a whole roller coaster of emotions from the beginning. The
growth of Jake Gyllenhaal's character, the anguish displayed by Natalie
Portman, the palpable pain and suffering by Tobey Maguire, and the fear
and anger displayed by the eight-year-old Bailee Madison all combine
for a very gripping tale.

Many regard this movie as anti-war. I simply do not see it as such.
Soldiers are praised for their heroism on the battlefield (which they
completely deserve), but all too often the wounds they suffer
physically and mentally are disregarded. This movie illustrates the
very real problem of the mental health of our service men and women,
and the problems it causes in family dynamics.

TagsAfghanistanUSA
The Road
The Alphabet Killer