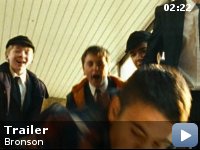 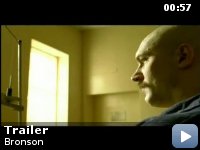 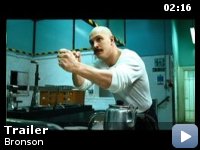 A young man who was sentenced to 7 years in prison for robbing a post office ends up spending 30 years in solitary confinement. During this time, his own personality is supplanted by his alter ego, Charles Bronson.

Storyline
In 1974, a hot-headed 19 year old named Michael Peterson decided he wanted to make a name for himself and so, with a homemade sawn-off shotgun and a head full of dreams he attempted to rob a post office. Swiftly apprehended and originally sentenced to 7 years in jail, Peterson has subsequently been behind bars for 34 years, 30 of which have been spent in solitary confinement. During that time, Michael Petersen, the boy, faded away and 'Charles Bronson,' his superstar alter ego, took center stage. Inside the mind of Bronson – a scathing indictment of celebrity culture.

Taglines:
The Man. The Myth. The Celebrity.

Bronson was born under the name of Michael Gordon Peterson on the 6th December, 1952, in Aberystwyth, Wales.

Factual errors:
Large parts of the film depict events that never happened; in particular the sequence where Bronson is released 'for being sane' during the 80's (Charlie was declared sane, sent back to prison and subsequently released in 1987), goes to live in a brothel (the 'brothel' is supposed to depict Uncle Jack's flat), starts a bare-knuckle boxing career (Charlie did box but never bare fisted) and gets his 'new' name, (His boxing promoter changed his name but not officially) then proposes to a girl before being sent back to prison. (Charlie did steal an engagement ring with the intention of proposing to his girlfriend. Also, Charlie only met Tom Hardy on two occasions.

Charles Bronson:
You shouldn't mess with boys what are bigger than you.

Director and Leading Man combine in an excellent expression of style.


Tom Hardy and Nicholas Winding Refn are the stars of the show here,
taking the story of 'Britain's most violent prisoner' and twisting it
into an explosion of style.

Tom Hardy plays Michael Peterson who was initially incarcerated for 7
years after robbing a Post Office but this sentence turned into a 34
year stretch after numerous cases of violence in prison. Of these 34
years 30 were spent in solitary confinement. In his short period
outside he assumed the fighting name of Charles Bronson after the Death
Wish star. It is his alter ego which dominates the film.

Hardy is magnificent, prowling around people almost growling, a
hulking, brooding, unpredictable beast who almost doesn't care what
happens to him, preferring gaol where his is someone to the outside
where he is no-one.

Many reviewers have been troubled by the lack of insight into the
character of Bronson, however this is unsurprising as the story itself
is narrated by Bronson himself, cutting back to a fantasy audience
where he parades in varying levels of makeup, the star of his own show.

Refn handles this material with aplomb, filling it with tracks and
pans, the occasional slice of slow motion, an interesting and varied
colour palate and impeccable taste in music. Kubrick and A Clockwork
Orange have been mentioned in almost every review, but there are clear
influences of Bertolucci, perhaps mostly The Conformist in its detached
style and use of colour.

By the time the film ends we are unsure who to feel sorry for, lost in
a world of hard lines and constant violence. A very interesting film
that marks out Hardy and Refn as exciting talents in modern cinema.