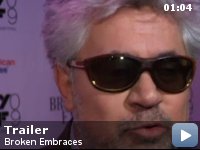 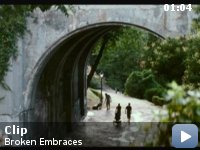 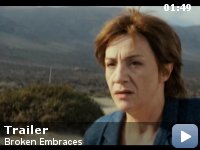 Harry Caine, a blind writer, reaches this moment in time when he has to heal his wounds from 14 years back. He was then still known by his real name, Mateo Blanco, and directing his last movie.

Storyline
Passion, obsession, wealth, jealousy, family, guilt, and creativity. In Madrid, Harry Caine is a blind screenwriter, assisted by Judit and her son Diego. The past comes rushing in when Harry learns of the death of Ernesto Martel, a wealthy businessman, and Ernesto's son pays Harry a visit. In a series of flashbacks to the 1990s, we see Harry, who was then Mateo Blanco, a director; he falls in love with Ernesto's mistress, Lena, and casts her in a film, which Ernesto finances. Ernesto is jealous and obsessive, sending his son to film the making of the movie, to follow Lena and Mateo, and to give him the daily footage. Judit doesn't like Lena. It's a collision course.

The photograph featured in the film of Harry and Lena embracing on Golfo Beach in Lanzarote has its roots in a real life photograph Pedro Almodóvar took of Golfo Beach whilst there in 2000. When he had the photograph developed, the director saw at the bottom of the photo a couple he hadn't noticed on the day embracing. "I felt that the couple hid a secret", he said later. "The whole island was holding a secret. I had to unveil that secret."

Anachronisms:
At the end of the movie, during Matteo remakes the video, we see two chairs in old video record which are made by Spanish designer Patricia Urquiola for Italian furniture brand Moroso (Antibodi chaise lounge – produced in 2006). While Lena was going to open the door for red dress woman there behind we can see each of them. And also outside in the terrace we can see another chair designed by P. Urquiola for Moroso (Tropicalia chair – produced in 2009). But from 1990 to 1996 P. Urquiola was the assistant professor to Achille Castiglioni and Eugenio Bettinelli at the Politecnico Di Milano and ENSCI in Paris.

Mateo Blanco:
I used to be called Mateo and I was a film director. I was always tempted by the idea of being someone else, as well as myself. Living one's life wasn't enough, so I invented a pseudonym, Harry Caine, an adventurer who, as fate would have it, became a writer…


Pedro's back and Madrid has gone wild. With the release of his 17th
feature film, "Los Abrazos Rotos" (Broken Embraces) Almodovár tells the
tale of a blind film director (Lluis Omar) and how he came to lose not
only his sight, but also the love of his life (Penelope Cruz). The film
is by no means a departure from the Spaniard's typical traits, with the
picture employing the usual Almodóvar fodder – love, lies, tears,
melodrama, comedy – to great effect. The film journeys between the past
and the present, and interweaves diverse stories and viewpoints, to
construct a fascinating drama full of twists and turns. The acting is
terrific and there are many 'in-jokes' involving subtle references to
previous Almodóvar films, with the picture rounded off nicely by a
soundtrack produced by the ever-brilliant Alberto Iglesias (featuring
original music alongside tracks by Uffie, Cat Power and Can).

My only gripe would be the film's length, clocking up over 2 hours – a
factor which is noticeable given that the film's storyline does seem to
run out of steam after the 90-minute mark. But that minor complaint
should not detract from the fact that Almodóvar has demonstrated
himself to be one of the most individual and consistent film-makers in
modern cinema. It must be said that 'Los Abrazos Rotos' is not the
tour-de-force that some fans may have hoped for and falls short of
eclipsing what in my opinion was his career high – Hable Con Ella (Talk
to Her). Nevertheless, Almodóvar delivers a very engaging film which is
sure to become another hit, and will no doubt earn more accolades for
the man who can deservedly call himself Spain's most successful
film-maker of all time.