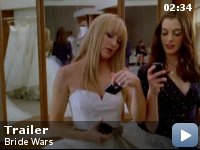 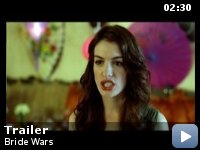 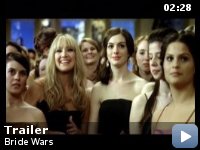 Two best friends become rivals when they schedule their respective weddings on the same day.

Storyline
In Manhattan, the lawyer Liv and the school teacher Emma have been best friends since their childhood. They both are proposed to by their boyfriends on the same day and they plan their wedding parties in Plaza Hotel, using the services of the famous Marion St. Claire. However, due to Marion's secretary's mistake, their weddings are scheduled for the same day. None of them agrees to change the date and they become enemies, trying to sabotage the wedding party of the rival.

The script was finished just before the 2007-2008 Writers Guild of America strike.

Boom mic visible:
In one of the scenes in the wedding planner's office, the boom mic is visible in the top of the frame.

Emma:
[to Liv]
Your wedding's gonna be huge, just like your ass at prom.

Liv:
Your wedding can suck it.

Ah, chick flicks, gotta love them, their non-clever formula's and
clichés are always a joy to watch. OK, I'm being a little mean, it's
all good, we do have some good chick flicks and from the moment I saw
Bride Wars, I thought it looked promising. Sure, there are a lot of
great conclusions that you come to when you see what the movie is
about, two best friends who are scheduled to marry the same day, from:
they're best friends who can't compromise? They could technically sue
the company that mixed their dates up or even get it fixed if that
company wanted to stay in business. But I just kept thinking, this is a
movie, it could be a funny one if I let go. We do need movies like that
that just escape reality, so I rented it the other day and I really
couldn't escape how silly and over the top this movie was.

Emma and Liv are best friends who have planned every detail of their
weddings since they first witnessed a wedding at the Plaza Hotel. The
two women get engaged. They then schedule their weddings with New
York's most famous wedding planner, but due to a clerical error they're
scheduled to have a wedding on the same day. A week of passive
aggressive hostility passes before the two women make it clear that
neither will compromise, especially after Liv tries to take advantage
of Emma's passive nature and outrages Emma in the process. The women
both attempt to sabotage the other's wedding, including Liv making
Emma's tan turn bright orange, Emma tampering with Liv's hair dye to
make it turn Liv's hair blue-white, Emma showing up to Liv's
bachelorette party to out-dance her, and Emma secretly sending Liv
chocolate and lollies to make her not fit into her dress. Oh when will
the madness end? Gotta love women.

Now the movie does have some good laughs here and there, but they're
mostly shown in the trailer. I think one of the reasons this movie
disturbed me though was due to the fact that there are women like this,
one's that are so beyond obsessed with their wedding they don't even
realize they're getting married. Women are competitive creatures
unfortunately, I'm a woman, so I know, and we go to great lengths to
prove we're prettier, smarter, kinder, etc., etc., etc. I wish that
women would take a step forward where this movie is just proving time
and time again that we are stupid. Two best friends who should love and
support each other are trying to destroy each other's weddings, I was
wrong in trying to give this movie a fair chance, it's just wrong on so
many levels, wither it's the morals or just the clichéd characters, I
wouldn't recommend Bride Wars.