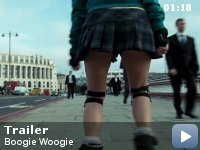 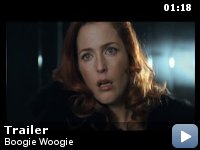 A comedy of manners set against the backdrop of contemporary London and the international art scene.

Storyline
In London's contemporary art world, everyone has a hustle. Art Spindle runs a high-end gallery: he hopes to flip a Mondrian for millions. One of his assistants, Beth, is sleeping with Art's most acquisitive client, Bob Macclestone. Beth wants Bob to set her up in her own gallery, so she helps him go behind Art's back for the Mondrian. Bob's wife, Jean, sets her eye on a young conceptual artist, Jo, who lusts after Art's newest assistant, Paige. Meanwhile, self-absorbed lesbian videographer Elaine is chewing her way through friends and lovers looking to make it: if she'll throw Dewey, her agent, under the bus, Beth may give her a show. And the Mondrian? No honor among thieves.

Taglines:
Seduction. Betrayal. Death. There's an Art to Everything.

Heather Graham and Christopher Lee had previously lent their voice talents in the video game EverQuest II as the leaders of the two opposing cities: Queen Antonia Bayle and Overlord Lucan D'Lere, respectively.

Entertaining and a great cast but too much going on


I'll admit that it didn't take much persuasion for me to go and see
Boogie Woogie, but even though I admit part of me went to see boobs, I
also went for the all-star cast and interesting and unique concept.
It's a film with a Hollywood cast set in present day London with a
focus on the art scene of the city; exploring people like artists and
collectors. It's a refreshingly unique and modern set-up for a film and
it works.

The story itself focuses on a painting called the Boogie Woogie by an
artist named Mondrian. It's currently in the ownership of Alfred
Rhinegold (Christopher Lee) and his wife Alfreda (Joanna Lumley). Their
fortune is declining and so Alfreda decides to put the painting up for
sale. Among those interested are aggressive gallery owner and
ambi-sexual Art Spindle (Danny Huston) and the deep-pocketed collector
Bob Maclestone (Stellan Skarsgard). Bob is married to Jean (Gillian
Anderson) who he frequently cheats on with his secretaries and
assistants. Beth Freemantle (Heather Graham) works for Spindle but
manages to get away thanks to her intimate relationship with Bob.

As you can tell, it's a massive cast of extremely colourful characters
full of drugs and sex. All the actors do a terrific job thanks to their
sharp acting and also the witty dialogue provided by the interesting
script.

The problem with having such a huge cast is that it's a bit hard to
keep track of things. The main plot strand seems to be Lumley's
character trying to sell the painting, but then all the other
characters seem to have their own stories as well which need to be
fitted in. As great as the characters are, there simply isn't enough
time to develop them enough to make some of them worthwhile. Some of
the sex also seems a bit forced, the lesbian subplot with heather
Graham and Jamie Winstone is hot and all but is it really needed (my
heart says yes, my brain says no)? The director Duncan Ward is clearly
at home though as some research led me to discover that he has history
in the art world. He manages to make it very compelling and keeps the
slightly bewildering but also interesting plot enjoyable. He is most
definitely in his element and it shows; the film looks great.

Boogie Woogie is a very entertaining film. The concept is unique, the
cast is excellent, the script and dialogue are very amusing and it
looks great. The director also puts in a fine shift. Unfortunately,
there's just too much going on; it's a brave and daring effort to
release a film so different and props to the cast for signing up to it.
If you can keep your head around all the plot strands then the great
performances and script will keep you entertained.