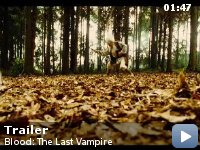 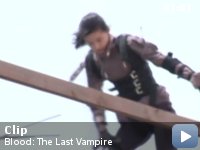 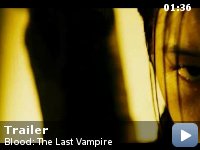 A vampire named Saya, who is part of covert government agency that hunts and destroys demons in a post-WWII Japan, is inserted in a military school to discover which one of her classmates is a demon in disguise.

Storyline
In 1970, the four hundred year-old skilled samurai Saya is sent to the Kanto High School in an American military base in Tokyo by the Council, a secret society that has been hunting vampires for centuries. Saya has the appearance of a teenager but is the tormented half-breed creature with the soul of her human father and the powers and need of blood of her vampire mother. She is obsessed to face the powerful demon Onigen that killed her father. In the base, Saya saves Alice McKee, who is the daughter of General McKee and commander of the base, from the attack of several vampires. When General McKee is killed by a member of the Council, Alice runs to the hotel where Saya is lodged. They join forces and go to the countryside to chase Onigen.

Taglines:
Now that She's Here, There Will Be Blood…

Anachronisms:
US military personnel are shown using Beretta M9s (US Military designation of the civilian Model 92F/FS, etc) which were not issued as sidearms for the US Military in 1970. The 92 wasn't designed until 2 years after this movie is set, and the side arm wasn't issued till 1990.

Michael Harrison:
Well, you know the old saying; "When the hungry demons feed without discretion…"

This movie NEEDS a do-over


This is one movie that needs a do-over. I say this as a fan of the
original anime. The leading actress was good, her teacher (Kato) was
good, actually, the cast were fine, it was the script that's bad and
the CGI was awful. This movie needs some money thrown at it with a
better writer. I believe the director had his hands tied 'cause there
wasn't enough money for what he wanted to do. I've seen directors make
a wonderful movie out of nothing but then, at least the script was
sound. Here, the director had no chance 'cause the script sucked and he
had no money (haha!) I blame the producer for this. It's their job to
bring in good talent. Talented writers, directors, actors, and money.

I hope someone with balls picks this film up and does a sequel that
does the original title justice.