Balls Out: Gary the Tennis Coach 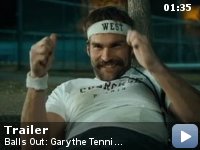 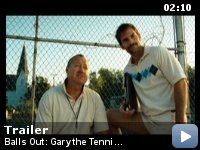 A high school janitor has not recovered from his failed career as a tennis pro. He begins coaching his beloved sport to a group of misfits and leads them to the Nebraska State Championships.

Storyline
A high school janitor has not recovered from his failed career as a tennis pro. He begins coaching his beloved sport to a group of misfits and leads them to the Nebraska State Championships.

Script was discovered by the BlueCat Screenplay Competition in 2005, going on to win the top prize. Within days, BlueCat sent screenplay to producer Peter Morgan to read.

Revealing mistakes:
When Gary was in Chang's home, Chang asked his grandpa in Mandarin Chinese with thick US accent, and his grandpa answered it in Vietnamese. So clearly, those two don't speak the same language.

From Dodgeball to ping pong to basketball and even ice skating, sports
have been the basis for wacky oddball comedies as of late, some better
and funnier than others. This one doesn't star Will Ferrel or Vince
Vaughan. Instead, it's Sean William Scott. He's been been funny before,
so O.K., not a bad start.


The film's script apparently also won an award, I'm told. I'm not
really sure how. There's nothing new or unexpected. It's the usual
routine: a group of misfits gets an unruly new coach who turns them
around and leads them to glory.

Sean William Scott plays tennis hasbeen/never-was Gary. He went on the
Mexican semi-pro tour after a few incidents in college, before settling
down in Nebraska, because it's as good as anywhere really. Plus the
real estate is cheap (referring to a banged up motor home). He became
an engineer – the custodial branch. One day he gets the itch an runs
out on the tennis court while the high school team is practicing. The
coach (Randy Quaid) recruits him as his assistant. Gary, for some
reason, is enamored with the coach, but then he dies. Because he's not
a teacher, the school can't make him the head coach, at least
officially. The new head coach (or co-assistant coach) has no
experience with tennis, or any other sport he says. In order to honor
the late coach, Gary is determined to coach the tennis team to a state
championship.

The cast includes lots of the usual oddballs: the gifted tennis player
who reminds Gary of himself; wimpy kids afraid of getting hit with the
ball; the sexy foreign language teacher as the subject of the
protagonist's desires. There's also the late coach's teenage daughter,
who interestingly, but oddly, has the hots for Gary before becoming the
love interest of the teams star player. Gary even recruits the weird
foreign kid – a pro ping pong player from the Philippines. He's never
played tennis before, but his hand/eye coordination must be amazing, as
Gary points out.

Balls Out actually does manage to be occasionally endearing with its
goofy characters. And Sean William Scott really can play a dirty
greaser very well – thanks most probably to his ability to grow a mean
fumanchu. He seems so greasy it's almost offputting at times, but funny
at others. When the late coach's daughter plants one on him, for a
minute it seems plausible that he'll actually go through with it. That
scene does lead to the film's mandatory act of turmoil and challenge.
Of course, it's overcome though.

I had a fair share of laughs, but only a few roarers. The exchange
student is comical in how quickly he himself becomes almost Gary's
partner in crime after moving into the motor home with him. In the end,
Balls Out just isn't consistently funny enough, and too many of the big
jokes fall flat. The film will likely be released amid the January slew
of films that studios would rather forget they made. I can't see the
movie making a big box office splash, but it might do alright depending
on what weekend it lands.