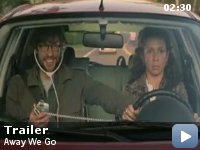 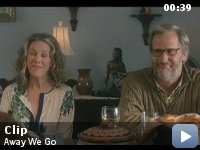 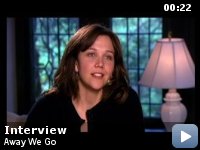 A couple who is expecting their first child travel around the U.S. in order to find a perfect place to start their family. Along the way, they have misadventures and find fresh connections with an assortment of relatives and old friends who just might help them discover "home" on their own terms for the first time.

Storyline
Burt Farlander and Verona De Tessant are a couple steeped in eccentricity and irregularity but are very much in love. So when they find out that Verona is pregnant they seem to be taking it in their stride. Verona is enjoying pregnancy, Burt is already practicing skill that he believes a good father should have, and they living in the same state as Burt's parents, Jerry and Gloria, so that their prospective daughter can have grandparents. However, things are shaken up when Burt and Verona go to dinner at Jerry and Gloria's house, as Burt's parents reveal a surprising piece of news. They have decided to move to Antwerp in Belguim a month before the baby is due, scuppering Burt and Verona's plans of having their children's grandparents around. Because Verona lost her parents when she was relatively young, she finds this news very hard to take, but the resilient couple quickly find a way to turn it in to a positive…

This is first Sam Mendes film where Thomas Newman did not compose the original score. Newman has scored every Mendes film since
American Beauty.

Errors in geography:
After Verona is refused admission on her flight from Phoenix to Madison, she and Burt take the train from a station clearly marked 'Phoenix'. Phoenix is the largest US city without intercity rail service.

Beckett:
Babies like to breathe, and they're good at hiding it. I put a pillow over a baby. I thought she wasn't breathing, but she was. She was sneaky, but I'll try again.


i just got back from a pre-screening of this in Dallas, and i must say
i really enjoyed it. it seems like the whole audience enjoyed it as
well, the theatre was often filled with laughter throughout this
wonderful film.

i'm a fan of Sam Mendes' work, and his work excelled here in the realm
of comedy. John Krasinski and Maya Rudolph shared great chemistry as a
couple expecting their first child and trying to decide where to settle
down and raise their family. it's a bit of a coming-of- age story about
people who should have already come-of-age, as we travel across the
country along with them meeting quirky parents, friends, and old
schoolmates.

it's not all laughs, though. there are plenty of serious and
introspective moments and my hat is off to Ms. Rudolph, generally known
for her skills in comedy, for adding fine dramatic moments to her
character. in the end, this movie doesn't offer any solutions to life's
quirks, but it looks at them and even celebrates them.

it's not Mendes' best film, but it's a very enjoyable film with a great
cast and lots of laughs, and should appeal to a pretty wide audience.
it's a breath of fresh air from all of the Hollywood flash and crap
that will be slopped across theater screens this summer. go see it!

TagsUSA
Autopsy
Evangelion: 2.0 You Can (Not) Advance