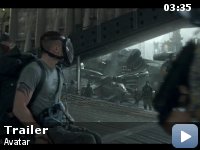 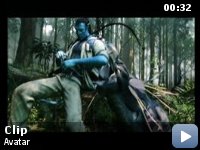 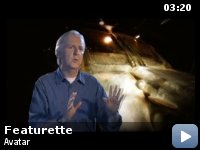 A paraplegic Marine dispatched to the moon Pandora on a unique mission becomes torn between following his orders and protecting the world he feels is his home.

Storyline
When his brother is killed in a robbery, paraplegic Marine Jake Sully decides to take his place in a mission on the distant world of Pandora. There he learns of greedy corporate figurehead Parker Selfridge's intentions of driving off the native humanoid "Na'vi" in order to mine for the precious material scattered throughout their rich woodland. In exchange for the spinal surgery that will fix his legs, Jake gathers intel for the cooperating military unit spearheaded by gung-ho Colonel Quaritch, while simultaneously attempting to infiltrate the Na'vi people with the use of an "avatar" identity. While Jake begins to bond with the native tribe and quickly falls in love with the beautiful alien Neytiri, the restless Colonel moves forward with his ruthless extermination tactics, forcing the soldier to take a stand – and fight back in an epic battle for the fate of Pandora.

The Na'vi language was created entirely from scratch by linguist Paul R. Frommer. James Cameron hired him to construct a language that the actors could pronounce easily, but did not resemble any single human language. Frommer created about 1000 words.

Audio/visual unsynchronized:
In the scene where Jake first meets Neytiri and is trying to thank her, he grabs her arm, however, the sound effect for grabbing her arm isn't in sync, as you can hear it a couple seconds before he does grab her arm.

Jake Sully:
[Narrating]
When I was lying in the V.A. hospital with a big hole blown through the middle of my life, I started having these dreams of flying. I was free. But sooner or later, you always have to wake up.

I was lucky to see Avatar at a pre-screening a few hours ago. It
completely blew me and the whole room away and i dare to say it will do
so to 80% of any audience anywhere. The remaining 20%, who always finds
something to complain about, will whine about character development,
dialog, story or the pop-corn.

Well, let me tell you: they went to this movie with the wrong
expectations.

You have most likely met Cameron's previous work(s): Aliens, Terminator
1 & 2, The Abyss, Titanic (!), just to name a few.

So WHAT should you expect from Avatar??? MORE of the same!!! More of
revolutionary film-making, more of grandiose new ideas, more of
never-before-seen special effects, more of 150 minutes without
relapsing, more of the James Cameron genius…

I am very happy that the trailers didn't give the full story away. Lots
of emotions are waiting for the viewer, laughter and tears also.
Cameron was very smart keeping the teasers as teasers, nothing more…
as the full movie will take your breath away.

You will practically not notice that you are watching a non-existing
world, it is sooo real. Attention to detail is superb. You computer
geeks will know what I am talking about. This move was not rushed in
the making. No wonder it could not have been done before – not having
the proper computing power.

The wild life, the jungle, the animals, the Na'vi-s, or the dragon-like
flying creatures are all so life-like, they almost pop-off the screen
(and in 3D they actually do 🙂 .

The sound effects were so well done, that when I saw at the credits
that Skywalker Sound was behind it, i could only think of "yessss…
now THAT makes sense."

Cameron is a visionaire – and again, he delivers, with full blast.

A certain character says in the movie that Pandora (the planet where
the story takes place) became his real world. My advice to you: let
Pandora become YOUR real world for two and a half hours, let it make
you completely forget about your life and problems, let it entertain
you, move you, let it carry you away.

Because THAT is what i expect as an exchange for my ticket.

And a few hours ago i got tens of tickets worth of that.

TagsUSA
Soul Kitchen
Up in the Air