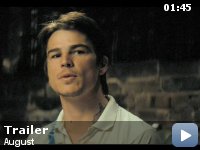 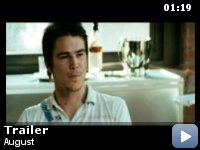 August centers on two brothers fighting to keep their start-up company afloat on Wall Street during August 2001, a month before the 9/11 terrorist attacks.

Storyline
Tom and Josh Sterling have a start-up dot-com. It's gone public to initial success. Josh is the technical genius. Tom is the fast-talking and abrasive CEO, in charge of the business side. It's August, 2001, less than a month before they can sell their shares and, perhaps, make lots of money. But the company is running out of cash, its main client is stalling, and share values are falling. For Tom to maintain the firm's appearance, he must find cash: investors could rescue him, but at a high cost of his potential wealth and company control. Tom goes to his brother for a loan. At the same time, an old flame, Sarrah, comes back to the city. Can Tom hold things together, bravura and all?


Screened this at the Sundance 2008 Festival. This movie actually caught
me by surprise, it was very hip and surprisingly Josh Hartnett really
brought it. The movie has a modern "Wall Street" type vibe, the story
follows Tom (Hartnett) who is a super confident .com entrepreneur who
is in crisis mode during the downward spiral of the .com stock bust
just before September 2001. Hartnet nails this role with high energy
output and makes this a very watchable flick. Austin Chick the director
is obviously very talented and throws just the right amount of style
and cool music into the film to keep it slick and contemporary which
should broaden its appeal past just the Gen-X group. The one downside
is that the film gives the other characters so little room to make
their presence felt, especially David Bowies character who gets only a
few minutes of face time. Other then that the movie really has a nice
pace and the ending worked very well when you consider all the
superficial things that Americans thought they cared about until Sept
2001, and then realized there are somethings much more important then
money and stature.

Film should get some nice play on the indie circuit, though indie folks
probably will be hard swayed to pay over for a Hartnett movie. I would
reckon that Josh Hartnett will win over some who doubted him with this
performance and maybe even get a little award type talk. I know its
hard for me to believe either 🙂