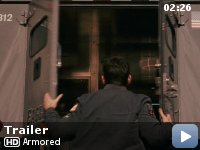 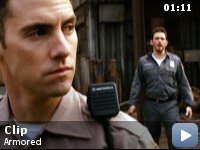 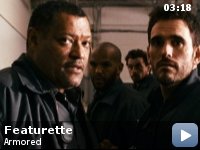 A newbie guard for an armored truck company is coerced by his veteran coworkers to steal a truck containing $42 million. But a wrinkle in their supposedly foolproof plan divides the group, leading to a potentially deadly resolution.

Storyline
The war veteran, Ty Hackett, is hired to work as security guard by the Eagle Shield Security where his old friend Mike Cochroone works. Ty is having financial difficulties after the death of his father, and is raising his brother Jimmy alone. He teams up with Mike's brother-in-law, Baines, and their coworkers Quinn, Palmer and Dobbs. One night, Mike invites Ty to join in the robbery of two armored trucks transporting forty-two million dollars. The reluctant Ty accepts after Mike promises that nobody would be hurt in the heist.

Taglines:
They have a plan that's going to catch EVERYBODY off-guard.

There is only one woman who has a speaking role in the movie: the child protection agent played by Lorna Raver. Her role is shorter than 4 minutes. Elizabeth Rivera has a non-speaking role.

Errors made by characters (possibly deliberate errors by the filmmakers):
In the beginning of the movie, after they pick up the money from the bank, you see the light is red (right side of screen) as they continue to drive through the streets without stopping.

Ty Hackett:
Rise and shine, let's go… You gonna miss the bus, get up.


I'm not here to tell you "Armored" is Kubrickian, Hitchcockian or
Fellini-esquire. Nope. Referenced directors are more like Don Siegel
("Charlie Varrick") and Walter Hill ("The Warriors"). Those two helmers
didn't fool around with niceties like putting women in their movies. No
skirts need apply. They unapologetically made guy movies. Guns, lots of
guns. Men met violent death with a twitch of the jaw. Their movies were
like a sap to the head. You want a friend? Get a dog.


"Armored" is so a guy movie. Dueling armored trucks? Bloody gunshot
wounds? Exploding money? If that doesn't get the lizard part of your
brain excited, then stay away.

At 88 minutes, "Armored" is all muscle without an ounce of fat. We meet
six security guards who drive armored trucks, three per truck. The six,
led by Matt Dillon, scheme up a fake hijack involving two trucks. Their
mission one day is to deliver $42 million from the federal reserve (I
think). The idea is to drive both trucks to a warehouse, stash the
cash, then stage a hijack. Sure, the cops will suspect them, but if
they stick together they'll get through it.

Trouble is, one of the six, played by Columbus Short, is a holdout. At
first. But he faces eviction. And he's the guardian for his messed up
younger brother. He needs cash bad.

Matt Dillon cajoles, pleads, persuades the holdout. No blood on
anyone's hands. A clean getaway. All good, no bad. You'll be rich
forever. Blue skies smiling at you …

Everything goes to hell, of course. It's one damned thing after another
and the stakes keep going up. And it almost all happens
claustrophobically inside an abandoned warehouse somewhere in Los
Angeles. In fact, the movie goes out of its way to project a backdrop
of industrial urban decay. I happen to like industrial urban decay.

Kudos to Matt Dillon, who plays the top bad dog. He goes from charming
to disappointed to frustrated to outraged to totally effing insane in
the course of the movie. Love that guy.

Also, credit is due to the menacing, throbbing, blistering and totally
sinister electronic soundtrack by John Murphy. I am guessing he's heard
a few Tangerine Dream records.

Also, it's surprising that this is a PG-13 movie. I caught one — one! —
f-bomb in this entire movie about violent tough-guy robbers. On some
level, I like that. Take the kids.

The director is Nimrod Antal, a Hungarian who made a fine noir set in
the Budapest subway system called "Kontroll." Screenwriter is an
out-of-nowhere guy called James V. Simpson.

A lot of the people in this movie are just starting out. I am willing
to bet the esteem given to this movie will rise as time goes on and
these filmmakers advance in their careers.

TagsUSA
The Road
The Alphabet Killer