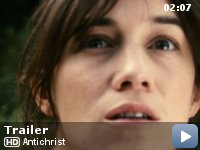 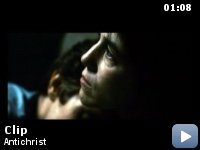 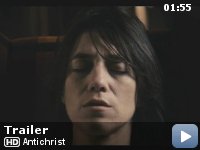 A grieving couple retreats to their cabin in the woods, hoping to repair their broken hearts and troubled marriage. But nature takes its course and things go from bad to worse.

Storyline
A couple lose their young son when he falls out the window while they have sex in the other room. The mother's grief consigns her to hospital, but her therapist husband brings her home intent on treating her depression himself. To confront her fears they go to stay at their remote cabin in the woods, "Eden", where something untold happened the previous summer. Told in four chapters with a prologue and epilogue, the film details acts of lustful cruelty as the man and woman unfold the darker side of nature outside and within.

This movie received a special anti-award from the ecumenical jury at Cannes. The jury, which typically awards a film that promotes spiritual and humanist values, decided to award this film an anti-award for its misogynistic views. However, Lars von Trier did not confirm in a later interview that he was a misogynist, saying he loved women and understood Her better than Him.


This movie drained me…

Without a doubt the most unpleasant and despairing movie I've ever
watched. It's not just the graphic imagery that got to me, but the
overall tone of the movie was incredibly dreadful and you could almost
feel a presence of some sort of "evil".

This is a hard movie to review. It crosses all barriers when it comes
to movie making…ALL. It makes you question yourself about what art is
and if there's anything as going "too far"?

But don't dismiss this. It's certainly much more than just being
graphic for the sake of it. First off, the cinematography is absolutely
flawless. The opening scene had me in absolute awe. Beautiful… And my
deepest respect to Willem Dafoe and Charlotte Gainsburg. I could only
imagine how much this would drain the actors both mentally and
physically. They are amazing and deserve Oscars.

I have to mention the violence too, since it's a critical aspect. This
isn't "torture porn" of any kind. It's natural (it's looks almost too
realistic), physical sexual violence. That's why it works so effective
on the audience. You can almost feel their pain. Never before have I
watched a movie where I felt the urge to look away. You would think
that, in the end, all this violence and self molestation is just a
shock tactic, but I assure you it's not. There is actually a plot and a
sensible progression of the movie. I of course won't say too much.
People need to see it.

I can understand why some people wouldn't like it, and that's okay.
This is most definitely not for everyone.

It may not be a movie that made me feel good, but it made feel
something and had an effect on me. It's beautiful, sad, poetic,
horrific and in the end, oddly uplifting. A genre masterpiece.