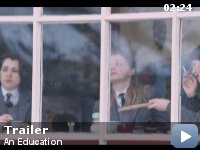 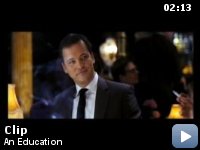 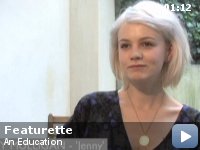 A coming-of-age story about a teenage girl in 1960s suburban London, and how her life changes with the arrival of a playboy nearly twice her age.

Storyline
In the early 1960's, sixteen year old Jenny Mellor lives with her parents in the London suburb of Twickenham. On her father's wishes, everything that Jenny does is in the sole pursuit of being accepted into Oxford, as he wants her to have a better life than he. Jenny is bright, pretty, hard working but also naturally gifted. The only problems her father may perceive in her life is her issue with learning Latin, and her dating a boy named Graham, who is nice but socially awkward. Jenny's life changes after she meets David Goldman, a man over twice her age. David goes out of his way to show Jenny and her family that his interest in her is not improper and that he wants solely to expose her to cultural activities which she enjoys. Jenny quickly gets accustomed to the life to which David and his constant companions, Danny and Helen, have shown her, and Jenny and David's relationship does move into becoming a romantic one…

Taglines:
Innocence of the Young.

Orlando Bloom dropped out a week before filming began; Dominic Cooper, who had previously been in talks, replaced him.

Anachronisms:
In the scene where David and Jenny are driving to meet the black family modern cars are visible in the background.

Miss Stubbs:
Anybody else?
[pauses]

An educated mind is not necessarily an open one


In the cinema certain historical periods have become associated with a
particular set of ideas. The 1960s represent change, progress and
excitement whereas the 1950s are frequently regarded as a period of
stifling social conformity. Of course, the "swinging sixties" did not
necessarily start to swing on 1st January 1960, and in retrospect the
first few years of the decade seem to have more in common with the
conformist fifties than with the "swinging London" era of the later
sixties. Certainly, many young people during this period regarded
London as a dull, conservative place, and looked eagerly to foreign
cities, especially Paris, as being more exciting and radical. There was
an enthusiasm for everything French- French philosophy, French
literature, French cinema, French fashions, even French jazz and French
cigarettes. This Francophilia doubtless included elements of wishful
thinking- De Gaulle's Fifth Republic was a more conservative place than
many Britons realised- but it was nevertheless an influential
phenomenon. It is a phenomenon explored in Julian Barnes' novel
"Metroland" (later filmed), and also in this film.


The main character is Jenny, a teenage schoolgirl living in the London
suburb of Twickenham in 1961. Jenny is highly intelligent, and is
studying hard with a view to taking the entrance exams to Oxford
University. She is not, however, really sure why she wants to go to
Oxford, except that she is being pushed to do so by her parents who
feel that university is the best place for her to meet a wealthy
husband.

Jenny's life changes when she meets a handsome and charming older man
named David. They quickly become close friends and begin dating. David
is clearly wealthy, and claims to be an art dealer and property
developer. More important to Jenny, however, is his knowledge of
culture. He is well up with all the latest intellectual and artistic
fashions from France and takes her to concerts and jazz clubs. What
really impresses her is that he takes her to Paris. Eventually, David
proposes to Jenny and she accepts and drops out of school without
taking her A-levels, her Oxford ambitions abandoned.

Many parents would be worried about the idea of their sixteen-year-old
daughter being romanced by a thirty-something man, especially if his
influence leads her to neglect her education, but Jenny's parents,
especially her complacent, Philistine father, seem strangely
unconcerned. His argument is that as Jenny has now found a wealthy
suitor there will be no need for her to use Oxford as a dating agency.
His one objection to David as a son-in-law seems to be that he is
Jewish. (Anti-Semitism was unfortunately widespread in British society
at this period). Yet it is obvious to the audience that there is a
darker side to David's character. His business methods are, to say the
least, not beyond reproach (the character may have been based upon the
notorious slum landlord Peter Rachman) and he never takes Jenny to his
home, always meeting her in a luxurious flat belonging to his friend
and business partner Danny. Eventually, even Jenny herself begins to
suspect that David is not all he seems.

The title "An Education" can be understood on two levels. As a
coming-of-age drama it narrates Jenny's metaphorical "education" in the
wider sense of learning lessons about life. Yet it obviously also deals
with her education in the narrower, literal sense of the word. It
raises similar issues to another great British film, "Educating Rita",
namely whether it is formal academic education or informal education to
be gained in the outside world which is the more valuable. Jenny drops
out of school because she believes that she can better acquire
knowledge, both of high culture and of the ways of the world, through
her life with David than through academic study. (Jenny's vision of her
future life envisages her living with David in Paris on the Rive
Gauche, reading Sartre, smoking Gauloises and going to the cinema to
see the latest productions of the Nouvelle Vague). It seems hard to
blame her for this conclusion, given that in the film the main advocate
of the life academic is her headmistress, an intellectual snob and
virulent anti-Semite ("The Jews killed Our Lord!") who serves as a
reminder that an educated mind is not necessarily an open one. It is
only when she becomes disillusioned with David that Jenny starts to
reassess her priorities.

Her performance in the lead role has led to Carey Mulligan being hailed
as the "new Audrey Hepburn", although the main point of resemblance
seems to be that at one point in the film Jenny sports (as many young
women doubtless did in the early sixties) a Hepburn-style hairdo.
Nevertheless, on the basis of this performance Mulligan would appear to
be a highly promising star in the making, perhaps the new Keira
Knightley. Although she is actually 24, she always seems entirely
believable as a naive young teenager. Other good contributions come
from Peter Sarsgaard as the smooth, reptilian David, Alfred Molina as
Jenny's comical, blustering father, Rosamund Pike as Danny's airheaded
mistress Helen and Emma Thompson in an excellent cameo as the obnoxious
headmistress.

Period drama is something the British cinema often does well, and "An
Education" falls within this tradition, even though it has a Danish
director, Lone Scherfig. 2009 has already seen two good British costume
dramas, "The Young Victoria" and "Dorian Gray", but "An Education" is
an even better one. It is not only a study of a girl on the verge of
womanhood, but also an exploration of issues such as social class,
racism and the value of education. One of the best British films of
recent years. I hope that the Academy will remember it when next year's
Oscars are being handed out. 9/10