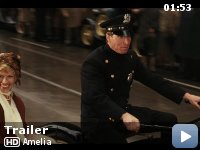 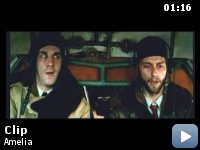 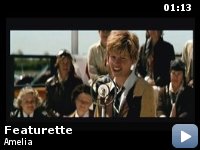 A look at the life of legendary American pilot Amelia Earhart, who disappeared while flying over the Pacific Ocean in 1937 in an attempt to make a flight around the world.

Storyline
Amelia Earhart, a Kansas girl, discovers the thrill of aviation at age 23, and within 12 years has progressed to winning the Distinguished Flying Cross for being the first woman to pilot a plane solo across the Atlantic Ocean. At age 39, she sets out on an attempt to circumnavigate the globe, an adventure that catapults her into aviation myth.

Gene Vidal (played by Ewan McGregor), who was widely assumed to have had a romantic relationship with Amelia Earhart as depicted in this movie, had only one child, Gore Vidal (played by William Cuddy). Gore eventually grew up to become quite a celebrity himself as a controversial but successful author, screenwriter and political activist.

Continuity:
When Amelia Earhart and Fred Noonan talk in the Papua New Guinea hut, a woman leaves the bar, then reappears in the same spot a few seconds later.

Amelia Earhart:
Who wants a life imprisoned in safety?


I was very disappointed with this movie. It's an honest statement and I
am prepared to explain why.

This film had so much on its side. Excellent actors, a fascinating
subject, in fact the whole thing reeked of Oscar-Worthy… until it
actually showed up in theaters. Perhaps it really did try, and I can
tell that it was MEANT to be an awards movie. It couldn't be further
from worthy.

"Amelia" is a highlights reel of Amelia Earhart's life, faithfully
chronicling all the significant events of the famed aviatrix's career.
However, it is hollow and nowhere is this more apparent than in the
depiction of Earhart's relationships. Or the lack of it. There's no
buildup, no exposition, no sort of character interaction to motivate
any kind of bond or love forming between individuals. Things just kind
of… HAPPEN. Amelia falls in love, falls out of love, and falls in
love all over again, all without any sort of event or prompt to
motivate it.

In fact, that's the problem of the entire film. Things just HAPPEN with
little or not buildup or motivation in between. Poignant moments come
and go with no warning or conclusion, rendering them meaningless and
out of context. It seems almost as though the director Mira Nair tried
a little too hard in the wrong direction.

This is a biopic, not a biography. Plenty of biographies have been
written about Ms. Earhart already, the facts belong there. This is
supposed to be a movie, and whereas I have no quarrel with facts, they
are not the most important aspects. Movies are supposed to be
snapshots, truer to the SPIRIT of a character and the MESSAGE of a
story than the events within. Events in and of themselves are hollow
and meaningless unless the MOTIVATIONS behind them are explained. In
"Amelia", they sadly are not, and we are relegated to seeing the
brilliant moments of Amelia's life pass with emotionless detachment.
Why? Because this movie makes no effort in building character, assuming
that the actors' charisma and the fame of their names would
automatically make us invested in their fates.

Ms. Nair, you were mistaken.