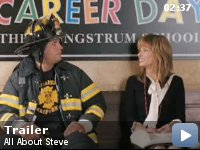 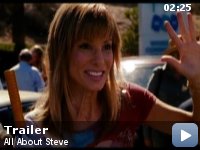 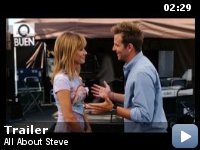 Convinced that a CCN cameraman is her true love, an eccentric crossword puzzler trails him as he travels all over the country, hoping to convince him that they belong together.

Storyline
Mary Horowitz writes crossword puzzles for the Sacramento Herald. She's loquacious to a fault. When kids at a career day make fun of her for being single, she accepts a blind date with Steve, the cameraman for a CNN-like news network. Within minutes she decides he's the man for her. He's quickly put off by her constant verbiage and over-the-top advances; he makes an off-hand remark about going on the road with her, and splits. She's moonstruck, writes a sappy crossword puzzle, loses her job, and decides to follow him as the news team crisscrosses the Southwest; Steve's team eggs her on. Then she falls in a mine shaft, and she and Steve become a story; is it a love story?

Sandra Bullock won the "Razzie" award for Worst Actress and actually showed up to the annual Razzies event to claim her prize. She brought a wagon full of DVDs of this film for the 300 attendees and asked them to watch or re-watch the movie. If in fact the audience decided she was NOT the Worst Actress and changed their minds, Bullock promised to come back to the Razzies next year, turn back in her award and buy drinks for everybody.

Crew or equipment visible:
When Mary leaves the hospital, a cameraman is filming her walking away. He's holding a 35mm film camera, so he's not a news cameraman.

Mary Horowitz:
Mary, why do you wear those stupid red boots all the time? You wanna know why? Because it makes my toes feel like 10 friends on a camping trip, that's why.


I really don't know what everybody was expecting when they went to see
this movie. I expected a good date movie and a fun watch. Instead I got
a light hearted movie about a woman who is like the rest of us, normal
in our own world but crazy to everybody else.


I really enjoyed this movie, I thought the acting was good and the plot
was decent. It is a very enjoyable watch and if it is one I would
advise you to see it. It has a very good core value to it. That one
person kinda different or not can make a change in one persons life. I
have a friend who is like this and it makes me only appreciate her
personality even more, I like her the way she is..

Don't listen to everybody else, see this movie yourself, and give it a
chance. You might like it.