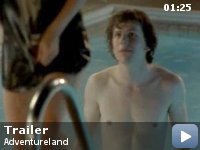 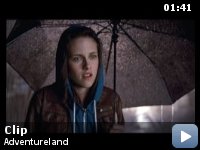 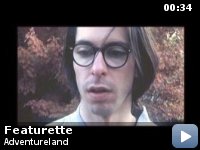 A comedy set in the summer of 1987 and centered around a recent high school grad who takes a nowhere job at his local amusement park, only to find it's the perfect course to get him prepared for the real world.

Storyline
In 1987, James Brennan's dreams of a summer European tour before studying at an Ivy League school in New York City are ruined after his parents have a severe career setback. As a result, James must get a summer job to cover his upcoming expenses at the decrepit local amusement park, Adventureland, where he falls in love with a witty co-worker, Emily Lewin. In that bizarrely shady workplace, the young carnies have unforgettable and painful learning experiences about life, love and trust while James discovers what he truly values.

Taglines:
It was the worst job they ever imagined… and the best time of their lives.

Kristen Wiig and Bill Hader were only on set for four days. All scenes with their characters, Paulette and Bobby, had to be condensed and shot quickly due to their commitments to Saturday Night Live.

Anachronisms:
The man that throws the piece of trash at Bobby is wearing Zubaz. Zubaz weren't invented until 1991.

Joel:
Oh, but I'm an atheist, maybe more of a pragmatic nihilist I guess or an existential pagan if you will…


There will be a backlash against "Adventureland", or at least a
disappointed reaction from some. The reason being that the film was
marketed as another raunchy-sweet comedy from the Apatow empire, when
in fact it has almost nothing to do with those films, and is very
different from most of writer/director Greg Mottola's previous film
"Superbad" (which is great in its own way, but it's nothing like this
film). It is a tender, intimate romance surrounded by goofball humor,
but the extent of the 'dirty jokes' in this movie is Jesse Eisenberg's
character James getting out of the pool at a house party with an
erection.

The movie is a sentimental (not sappy, mind), very personal, journey
through the summer of 1987 for recent college grad and deep thinker
James Brennan (played superbly by Jesse Eisenberg), whose plans for the
summer fall apart (due to Reaganomics affecting his father's income)
resulting in him having to get a crappy job at the titular amusement
park. There he meets Em, played by Kristen Stewart, and the romance,
which is the focus of the film, begins. This is very, very far removed
from the slob-meets-babe formula common in comedies in recent years.
James is a virgin, true, a 22 year old one at that, but that has far
more to do with the character's tentative nature than any 'quest' to
get laid (ala "The 40 Year Old Virgin", which works on its own terms of
course, but is again nothing like "Adventureland"), and he is far from
bad looking. Em isn't a dolled-up 'hot chick' with perfectly styled
hair and perfect style, she's moderately well-dressed and naturally
beautiful, but wears makeup in a grand total of two scenes, and is
actually NOT the 'babe' in the film (that's Margarita Levieva as Lisa
P, who, though the 'babe', is not the sought-after one).

I am finding it hard to describe exactly why I loved this film as much
as I did, but I think it mostly comes down to subtle, wonderful writing
by Mottola, who was obviously telling a personal story here and did a
great job of it. The screenplay is a funny, poignant take on
post-collegiate angst and love, with some elements of social satire,
and its focus is one of the most memorable and wonderful romances in
quite some time. This romance makes Stewart's breakthrough hit
"Twilight" seem even more offensively dumb, because of just how real it
is.

Mottola, who absolutely nailed "Superbad" as a director, does even more
with "Adventureland". His work with the actors is perhaps most notable.
Bill Hader does what he did in "Superbad" and Matt Bush plays a
slapstick role as Tommy Frigo, but everyone else is given more
emotional poignancy and range to work with. Ryan Reynolds has abandoned
his trademark smarmy shtick for a straight role in the film. As noted
by Nathan Rabin in his review of "Adventureland", in a lesser film
Reynolds (a failed attempt at a 'rock star' who is in an unhappy
marriage and is having an affair with Em, and who is a loser to
everyone but the deadbeats younger than him at the amusement park)
would be a villain, James Brennan's adversary in a typical love
triangle. In "Adventureland" he's a real person, and a rather tragic
character. Not a nice guy, not a bad guy either. Martin Starr is great
in the main supporting role as Joel. Mottola's direction is fantastic
visually as well, with every scene brimming with intensity when it
needs to be and the comedic timing again excellent. His use of music is
absolutely spot-on, and if you thought the funky greatness of the
"Superbad" soundtrack was good wait until you hear this low-key but
incredible soundtrack made up almost entirely by great 80's pop songs
(and not the mainstream garbage). Great musical score by Yo La Tengo as
well.

The film is ultimately such a massive success I think due to Kristen
Stewart. I knew she was a capable actress but did not know that she was
this terrific. She is transformed into Em for the entirety of the film,
and is overwhelmingly intense for the entirety of her performance,
whether the raw (but not even close to raunchy) sexuality of her scenes
with Eisenberg (and boy do they have a rare sort of chemistry) or the
understated sadness of her scenes with Reynolds. Eisenberg and Stewart
are so wonderfully understated with their performances that their
romance feels realer than anything I've seen since Zooey Deschanel and
Dan Schneider in David Gordon Green's "All the Real Girls". This might
be a familiar journey but the treatment of Reynolds' character is only
one thing Mottola does different from the John Hugheses of the world.
Everything about this film is just more real and more understated than
so much of what we've seen done with similar things.

The film has one or two scenes where plain lust is the focus, and
absolutely none where the movie becomes about sex jokes. That James is
a virgin is a side note, part of the character and nothing more. It
couldn't be less about James wanting to bed Em, it couldn't be more
about him being totally in love with her. Although critics are falling
over themselves to praise the film (89% on RottenTomatoes at the time
I'm writing this and a score in the high 70's on Metacritic) some have
called it 'ordinary'. Perhaps much of the public will agree with that
minority of the critics, but the film thrives on capturing 'ordinary
moments'. The simple beauty of James, Em, and Joel watching fireworks
on the 4th of July or a marijuana-fueled bumper car round scored to
"Just Like Heaven" by The Cure. That's what this film is about. It's
wonderful, it's beautiful, and if it's not a sleeper hit this year then
it will eventually become a cult classic. It's something special, that
much I know for sure.