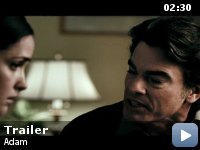 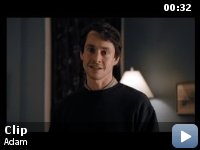 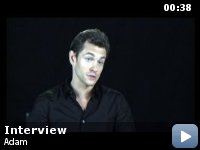 Adam, a lonely man with Asperger's Syndrome, develops a relationship with his upstairs neighbor, Beth.

Storyline
Soon after moving in, Beth, a brainy, beautiful writer damaged from a past relationship encounters Adam, the handsome, but odd, fellow in the downstairs apartment whose awkwardness is perplexing. Beth and Adam's ultimate connection leads to a tricky relationship that exemplifies something universal: truly reaching another person means bravely stretching into uncomfortable territory and the resulting shake-up can be liberating.

Taglines:
A story about two strangers. One a little stranger than the other…

The Chief Executive Officer of Halloran, in the letter regarding Adam's interview, is named Tamar Ganish. The film's production designer is Tamar Gadish.

Errors made by characters (possibly deliberate errors by the filmmakers):
At one point in the film, Mr. Buchwald calls Beth "Bethany", suggesting that is her full name. However, at the end of the film when Adam opens up Beth's book, it clearly reads, "Written by Elizabeth Buchwald", suggesting her full name is Elizabeth.

Beth Buchwald:
My favorite children's book is about a little prince who came to earth.


As someone who actually does suffer from Asperger's Syndrome, it is
easier for me than it might be for some people to understand and relate
to many of the things that Adam says and does. I have been apprehensive
in the past about viewing films that deal with this sort of subject, as
I have learned that many of them paint stereotypical, unrealistic, and
occasionally belittling portraits of people in my place or other
similar situations. I was pleasantly surprised upon viewing this, as it
really hit home in many ways. I often found myself saying "this reminds
me of me" when watching Adam live his life from day to day (though we
are very dissimilar in that I would never have a tantrum in front of a
girl). Finally, this is quite possibly the most down to earth movie of
its kind, as there is nothing that happens in it that cannot or is
overly unlikely to happen in real life. Unfortunately, I cannot give it
a perfect rating, because as impressive as its portrayal of Asperger's
syndrome is, the story itself is weak and uninspiring and not as
compelling and heart-wrenching as it ought to be.