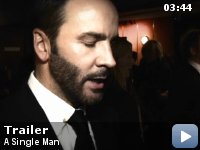 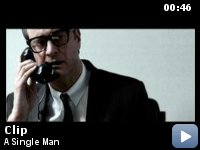 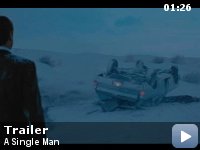 A story that centers on an English professor who, one year after the sudden death of his partner, is unable to cope with his typical days in 1960s Los Angeles.

Storyline
It's November 30, 1962. Native Brit George Falconer, an English professor at a Los Angeles area college, is finding it difficult to cope with life. Jim, his personal partner of sixteen years, died in a car accident eight months earlier when he was visiting with family. Jim's family were not going to tell George of the death or accident let alone allow him to attend the funeral. This day, George has decided to get his affairs in order before he will commit suicide that evening. As he routinely and fastidiously prepares for the suicide and post suicide, George reminisces about his life with Jim. But George spends this day with various people, who see a man sadder than usual and who affect his own thoughts about what he is going to do. Those people include Carlos, a Spanish immigrant/aspiring actor/gigolo recently arrived in Los Angeles; Charley, his best friend who he knew from England…

In his acceptance speech when he won a BAFTA for Best Actor on 21 February 2010, Colin Firth revealed that he had been on the point of turning down the part and had the email to director Tom Ford in his outbox, waiting to be sent. Then a man arrived to repair his refrigerator and Firth reconsidered. He thanked "the fridge guy" in his speech.

Anachronisms:
Kenny uses the expressions "cool" and "blows my mind" during the bar conversation. "Cool" was an adjective, not an exclamation, in the early 1960s. It and "mind-blowing" were usages that came in with the Hippy era of the late 1960s.

George:
The bathroom's just down the hall, if you'd like to take a shower.

Kenny:
Aren't you taking a shower too, Sir?

The Power Of Love


A stunning outing for Tom Ford. The images are, clearly, out of an
aesthete's mind without being shallow, ever. I believe there is a
dramatic reason behind every frame. Colin Firth, looking truly
handsome, goes through a day of torment with remarkable civility. I
felt involved and shaken and couldn't help but make mine his pain. The
flashbacks with Matthew Goode are truly vivid and truthful. This is a
step forward in explaining through images that love is love no matter
who you are, where you come from or what your circumstances are. It
could have been a man and a woman, the fact that it's a man and a man
is almost irrelevant. We recognize the feel of it and Colin Firth's
performance is the magic stroke that makes that not only possible but
natural. It is a sensational debut for fashion star Tom Ford. True to
himself an artist that promises great, wonderful things for the future.
I can't wait.