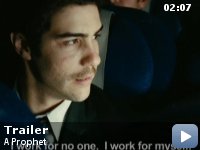 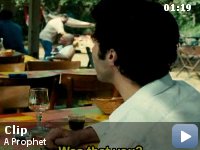 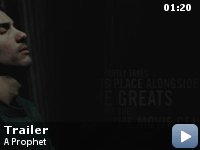 A young Arab man is sent to a French prison where he becomes a mafia kingpin.

Storyline
Nineteen year-old Franco-Arab Malik El Djebena is just starting his six year prison sentence in Brécourt. Although he has spent the better part of his life in juvenile detention, this stint is his first in an adult prison. Beyond the division of Corsicans and Muslims in the prison (the Corsicans who with their guard connections rule what happens in the prison), he has no known friends or enemies inside. He is just hoping to serve his time in peace and without incident, despite having no prospects once he's out of jail since he's illiterate and has no support outside of the prison. Due to logistics, the head of Corsican inmates, a sadistic mafioso named César Luciani, co-opts Malik as part of the Corsicans' activities, not only regarding what happens inside the prison, but also continued criminal activities outside. The innocent Malik has no idea what to do but cooperate…

Prior to making this film, Jacques Audiard had screened a film to prisoners in France. Shocked by the conditions in the prison facility, he decided his next film would take place in one.

Prisoner:
Take these handcuffs off!

You live in prison and what you live isn't giving any concessions to reality.


"Un prophète" tells the story of a somewhat naive but intelligent young
inmate from Arabic origins who rises through the criminal ranks to
become a big boss. Serve with an outstanding cast and an almost
exclusively males and non-professional actors, the film of Jacque
Audiard manages to prove that you don't need a so called bankable
actor/actress in order to make a masterpiece.

What you need is a vision, an excellent scenario and a perfect casting.
Set mainly within prison walls, the film depicts the prison "career" of
Malik el Djebena, a 19-year-old man of North African origin who was
sentenced to six years in prison. At his arrival in prison, Malik
(wonderfully played by Tahar Rahim) is forced by Cesar Luciani, a
Corsican kingpin (played by the excellent Niels Arestrup) to kill a
prisoner named Reyeb. What follows is a powerful film that grabs your
attention from beginning to end. The film works on so many levels and
yet achieves excellence in all of them. "Un prophète" works as a social
description of the hellish atmosphere one could encounter in prison.
The promiscuity, the dirtiness, the drug, the sex, the corruption are
detailed through very well drawn out characters and situations. You
live in prison and what you live isn't giving any concessions to
reality. "Un prophète" is a thrilling gangster film deprave of any sort
of Manichaeism. Between the buildings of a drug business, the contract
to assassinate a mafia kingpin, the negotiation with a local mobster
and the rise to power of a young bandit or "racaille", the film manages
to link every single story and wrap them all in one big and dark vision
of what the French society can also produce. Eventually the film
triggers so many emotions; in 150 minutes the audience balances from
bitterness to injustice and from violence to peace. Jacques Audiard and
Stéphane Fontaine (director of photography) controlled with mastery
both the "mise en scène" and the cinematography. Using here stop motion
there torch like effect and opposing darkness to light they cut out
possible definitions for the words loyalty or betrayal, friendship or
servitude, destiny or curse.