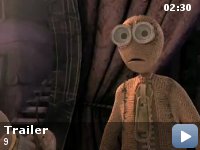 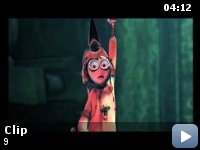 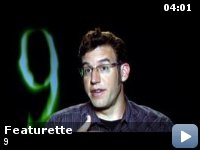 A rag doll that awakens in a post-apocalyptic future holds the key to humanity's salvation.

Storyline
In a world destroyed in a war between man and machine, a hand-stitched doll with the number 9 written on its back comes to life. The world he has awakened in is frightening, but he quickly learns that he is not alone and that there are others like him, also with a single digit written on their back. The first one he encounters is 2 who tells him something of what happened to the world. 2 is also thrilled with the disk 9 is carrying, one with three unique symbols on the front. 9 soon learns that the disk and some of the other dolls who are prepared to die for the good of humankind may be the last hope for man's salvation.

The script, some drawings, character design and a copy of the short film was given to Jennifer Connelly when she was offered her part.

Continuity:
Once 2 places the voice box into 9, the zipper remains open. However, in the next shot, 9's zipper is closed. The following shot has the zipper open again. 9 is later shown zipping his zipper closed.

Scientist:
We had such potential. Such promise. But we squandered our gifts, our intelligence. Our blind pursuit of technology only sped us quicker to our doom. Our world is ending. But life must go on.


9 is better than average… but only barely.

The movie is carried by a unique visual style and a great sense of
"place." The sack-men (and woman) are refreshingly odd and fun to
watch. The post-apocalyptic city is consistently beautiful and
dangerous. Desolate without feeling dull.

Unfortunately, the story and characters ARE dull. Not crushingly so…
but enough to frustrate. Frequent, obvious plot holes and violations of
established world-rules pulled me out of the movie over and over again.
Tired clichés abound. I wasn't able to shake the feeling that I'd seen
and heard this all before.

And that's a shame because there's a lot of potential here. If only the
writer had taken more chances. Why not challenge the audience and defy
expectations? Why make a movie that's too scary for kids but too
simplistic for adults? Who is expected to enjoy it?

I would watch another Shane Acker movie if one is made (hopefully after
he's picked a target audience). But 9 is not a classic.

… that said, it's probably worth watching on the big screen just for
the sights and sounds.

TagsLuxembourg
Extract
What Doesn't Kill You