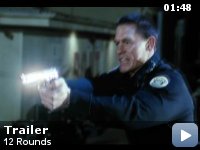 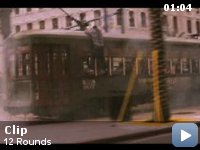 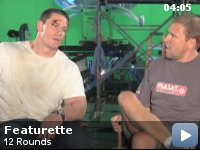 Detective Danny Fisher discovers his girlfriend has been kidnapped by a ex-con tied to Fisher's past, and he'll have to successfully complete 12 challenges in order to secure her safe release.

Storyline
Uniformed New Orleans PD officer Danny Fisher earns his promotion to detective to his near-rather lucky, albeit brave, arrest of ruthless terrorist arms-dealer Miles Jackson, whose girlfriend Erica Kessen got accidentally killed during the dirty FBI-operation. Exactly a year later, Miles has escaped and blows up Danny's house as foretaste of a Herculean race to accomplish twelve near-impossible tasks against the clock, otherwise his kidnapped wife Molly will be killed. Yet at the end, another master-plan is suspected.

The DVD contains the trailer to
The Marine 2. John Cena starred in the original,
The Marine, however, he is being replaced by fellow WWE wrestler Ted DiBiase Jr. in the sequel.

Errors made by characters (possibly deliberate errors by the filmmakers):
As the character Danny Fisher along with his brother are entering the building on fire they pass a fireman breaking the window of the housing to a wall-mounted fire-hose. These are supposed to be unlocked and the doors should allow themselves to be opened 180° – any fireman would know this.


This type of movies are predictable. Good guy vs. Bad guy. Yes, from
the trailer we've all seen it before. We know what's gonna happen next.
But what's refreshing about "12 Rounds", the latest John Cena outing,
is that it has solid action scenes, that were filmed for real, thus
giving the movie an extra edge. All of this is thanks to director Renny
Harlin.

I am not ashamed to call myself a fan of Renny Harlin. He, as you may
know, is a director who puts his heart in crafting white-knuckle
action. Think "Die Hard 2", "Cliffhanger", and "The Long Kiss
Goodnight". All of those films contain many thrilling action, most of
them filmed practically, without CGI. The film's plot, although a
blatant but forgivable rip-off of "DH3" and with elements of "The
Marine" works well with Harlin because it is what he does best – making
solid action FOR REAL. Two action sequences deserve mention here;
Cena's character (unintentionally…I think) using a fire engine to
destroy part of New Orleans faster than Hurricane Katrina ever will,
and a sequence involving a tram, which is impressive.

As for the acting, it's pretty mediocre at best, but with action
movies, it's normal nowadays. John "Matt Damon on steroids" Cena here,
however, is a step up from his previous "Marine", here he's more
flexible and believable. Brian J. White is okay as his partner, as per
his sweetheart, Ashley Scott. The villain played by Aiden Gillen, is
what could be the first time I've seen a movie villain be intelligent
and annoying at the same time. The rest of the cast, especially the FBI
agents, fall flat.

And finally, as far as believability goes, the film is not nearly as
ridiculous as "The Marine", it's more realistic. Sure, there are few
"ok that's bull" scenes, but there's very little of that, in fact in a
scene I thought Cena would become Evel Knievel but thankfully he
didn't.

So in short, it's a big, loud, dumb, and fun time waster. See it for
the action only. It's a big breath of fresh air after CGI laden DTV
nonsense. Glad to see Harlin back doing what he does best; old school
action.

TagsFBIUSA
While She Was Out
Shinjuku Incident