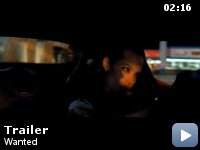 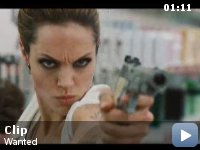 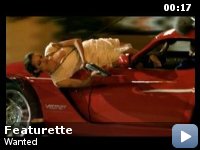 A frustrated office worker learns that he is the son of a professional assassin, and that he shares his father's superhuman killing abilities.

Storyline
A young man finds out his long lost father is an assassin. When his father is murdered, the son is recruited into his father's old organization and trained by a man named Sloan to follow in his dad's footsteps.

One of Cross' victims is identified by the Gunsmith as "Rictus". The main antagonist in the comic book is Mister Rictus.

Continuity:
In the scene where Fox receives the order to kill Wesley, the personal stats are listed as "Eyes: Gr" while a previous monologue states (and close-ups of him at the loom show) them to be blue.

Wesley:
[voice-over]
It's my anorexic boss' birthday. This means there's a certain amount of inter-office pressure to stand around the conference table, eating crappy food and pretending to worship her. Acting for five minutes like Janice doesn't make all our lives miserable is the hardest work I'll do all day. My job title is account manager. I used to be called an account service representative, but a consultant told us we have to manage our clients, and to not service them. I have a girlfriend who I neither manage or service. That's my best friend Barry fucking her on an Ikea kitchen table I picked up for a really good price. I'm finding it hard to care about anything these days. In fact, the only thing I do care about is the fact that I can't care about anything. Seriously, it worries me. My name is Wesley Gibson. My dad walked out on my mom when I was seven days old. Sometimes I wonder if he ever looked into my baby blue eyes and asked himself "did I just father the most insignificant asshole of the twenty-first century"?

WANTED: The Matrix with a great sense of humor.

I am a huge fan of Mark Millar's Wanted. And so, when I entered the
theater with a friend on an advance screening pass (comic book store
owners are very nice people to befriend), fear gripped me. It HAS to
suck…right? It's Hollywood…and a "loose" adaptation…

And so, once the credits rolled, and I was one of the many people
laughing and clapping, the fear had long passed.

The films works. It provides the amazing opiate of style and dark
humor, and in such massive quantities that both evoke the spirit of the
source material and utterly ignore the latter 90% of the graphic novel.
But that independent streak works for Wanted. You feel a sense of
amused wonder and curiosity throughout, and all the plot twists that
follow are different enough from the source to actually hold your
attention without ever being prematurely obvious.

James McAvoy does an excellent job, and his wry, sarcastic narration
sets the mood of the film perfectly. His evolution from pansy to Neo
has a genuine and pleasantly arrogant feel to it, although the
stereotypical Rocky-esquire training montage is used to speed things up
a bit (what a tiresome tool). Basically, his version of a cinematic Neo
is both smarter, more entertaining, and more intelligent.

Backing him up, more with sexy looks and an "I'm too cool for you;
you're not Brad" attitude than anything, is Angelina Jolie. Her
character screams Trinity. And loudly. Regardless, watching her
on-screen is a pleasure. She's terribly likable, and extremely lethal
throughout.

Morgan Freeman's Morpheus, called Sloan here, is played well, although
the role is a bit beneath his skill as an actor. He makes it work
though, playing the wizened and mature helper very well. More
importantly, he delivers an excellent (and unexpected) line that rivals
Samuel L. Jackson's memorable expression from Snakes on a Plane. That
alone makes any price of admission worthwhile.

Any other character serves as nothing more than white noise, there to
populate the world rather than intrigue.

The theme of Wanted is all about taking charge of your life and making
your own choices, something that the very premise of the first hour of
the film both adheres to and contradicts. Rather than analyze it here
(and waste time arguing the pleasantly mad logic of a movie where
bullets bend stylishly), I'll leave that to the people who inevitably
will, assuming the bullet-fu and gore don't completely captivate them
(and they should). Wanted IS violent, truly, and yet it doesn't strive
to turn every frame into a gory, action-packed orgasm. The film handles
it with grace and a style I sorely wish more action movies took into
consideration.

This really isn't a superhero comic adaptation…it's The Matrix with a
great sense of humor.