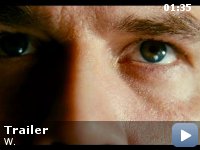 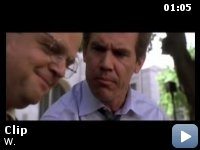 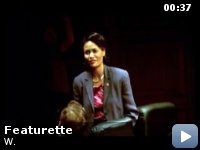 A chronicle on the life and presidency of George W. Bush.

Storyline
Oliver Stone's biographical take on the life of George W. Bush, one of the most controversial presidents in USA history, chronicling from his wild and carefree days in college, to his military service, to his governorship of Texas and role in the oil business, his 2000 candidacy for president, his first turbulent four years, and his 2004 re-election campaign.

The White House speechwriter named "Mike" played by Colin Hanks is based on two real speechwriters for George W. Bush, David Frum who wrote the "Axis of Evil" speech, and Michael Gerson who was Bush's chief speechwriter from 2001 to 2006.

Errors made by characters (possibly deliberate errors by the filmmakers):
Due to his past history of alcohol abuse, President Bush quit drinking in 1986. Bush is seen drinking beer during his presidency, specifically during the "pretzel choking" scene and while watching baseball at the end of the film. He is actually drinking O'Doul's a non-alcoholic beer. However, when Bush Sr. is elected President in 1988, a perturbed W. is drinking "Near Beer."

Donald Rumsfeld:
[about Saddam Hussein's WMDs]
The absence of evidence is not evidence of absence.

A Fair And Balanced Portrait of a… Fairly Simple Man

This is a very good movie, but not the classic it wants to be. It's
funny and tragic, although not too informative if you've read a
newspaper with any regularity over the last eight years. In short,
there are no surprises.

Josh Brolin gives an excellent performance as W., and the supporting
cast is generally superb, although Jeffrey Wright, Richard Dreyfuss,
and James Cromwell particularly stand out. Thandie Newton is
hysterically funny as Condie Rice, but it's an SNL-type parody, not an
emotionally honest performance.

The film is obviously meticulously researched and carefully considered,
which is why the sequences that are clearly either utter conjecture or
merely political finger-pointing stand out by a mile.

Bush — whom I personally despise for his offensive combination of
idiocy and self-righteousness — is treated with fairness and
sensitivity. The effort here is obviously to fashion him as a tragic
hero; a man who genuinely wants to do good but simply doesn't grasp how
hard that is, especially when surrounded by the likes of Karl Rove and
Dick Cheney (who is, very specifically, the villain of the piece, as he
is in life). And it generally works. I found myself feeling bad for the
poor guy.

However, while trying to make W. a sympathetic character, Stone pushes
his theme — "It Was All To Prove Himself To Daddy" way too far. He
overplays his hand, including a mood-breaking dream sequence near the
end. There simply has to be more to George W. Bush than that…..
doesn't there? The film ultimately plays much, much better when Stone
relies on actual transcripts and information gathered by experienced
reporters, and those sequences, whether they are cabinet meetings,
press conferences, or more personal moments, snap and zing.