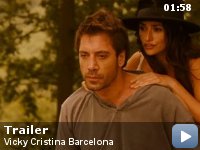 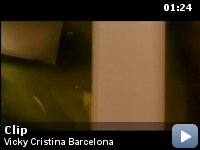 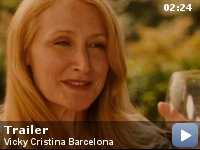 Two girlfriends on a summer holiday in Spain become enamored with the same painter, unaware that his ex-wife, with whom he has a tempestuous relationship, is about to re-enter the picture.

Storyline
Sexually adventurous Cristina and her friend Vicky, who is bright but cautious, holiday in Barcelona where they meet the celebrated and wholly seductive painter, Juan Antonio. Vicky is not about to dive into a sexual adventure being committed to her forthcoming marriage. But Cristina is immediately captivated by Juan Antonio's free spirit and his romantic allure is enhanced when she hears the delicious details of his divorce from fellow artist, the tempestuous Maria Elena.

Taglines:
Life is the ultimate work of art

For his brief driving scene in this movie, Javier Bardem underwent hours of driving instruction and still didn't have a driver's license to show for his efforts when the movie wrapped.

Narrator:
Vicky and Cristina decided to spend the summer in Barcelona. Vicky was completing her master's in Catalan Identity, which she had become interested in through her great affection for the architecture of Gaudí. Cristina, who spent the last six months writing…
[…]

A triumphant effort from Woody Allen


Although this film has bizarrely been described as breezy summer
entertainment by some top critics (which leads me to wonder if they saw
the same movie I did, or just the first half hour), "Vicky Cristina
Barcelona" is the closest thing to the sort of examination of
relationships that Allen became famous for in quite some time
("Anything Else" counts, I suppose, but lacks the sharpness this film
has), and although it is far from as weighty as some of his dramas or
even some of his comedies, this is his first really inspired script in
a while, featuring a cast of detailed, well-developed characters, some
razor-sharp observations on relationships, and a wicked sense of humor.

Although I never thought Woody's work this decade was particularly poor
(other than "Cassandra's Dream" and although I'm in a minority "Match
Point"), it has mostly been completely inconsequential and almost
entirely dependent on broad characterizations and heavy plotting rather
than real people and awkwardly comic situations (which has always been
Allen's strong suit). A career-best performance from Scarlett
Johansson, a wickedly entertaining turn from Penelope Cruz, and the
absolute revelation that is Rebecca Hall form a great cast along with
Javier Bardem in a role that may surprise the majority of the American
public (well, for most of the movie, anyway). You can feel Allen's mark
on their mannerisms, but they all seem to disappear into these
characters, that's how good they are.

I'm keeping this as spoiler-free as possible, because it's really worth
going into the theater not expecting anything in particular and
savoring the film's often unexpected but never contrived plot twists
and turns. All you should know is that Vicky (Rebecca Hall) and
Cristina (Scarlett Johansson) go to Barcelona for the summer and things
get complicated when they meet a charming, mysterious, and rich painter
(Javier Bardem) and he makes a rather upfront proposition to both of
them. It's best if you know nothing of how Cruz' character impacts the
film prior to watching it.

In relation to Allen's other work I thought it was interesting that he
never attempted to analyze sex. The whole movie is in many ways about
sex, and there is a lot of the expected philosophical and psychological
examination of the relationships between the characters in the film,
but sex itself is never analyzed as it is in much of Allen's work, and
is instead treated as the impenetrable mystery it is. That said,
Allen's script is extraordinarily nuanced, something that I haven't
expected from his writing in a while. Sure, the characters still
represent opposing romantic philosophies, but there's a spark in the
writing that makes these feel like real people as opposed to mere
characters. That spark, that chemistry is there throughout "Vicky
Cristina Barcelona", it's there in the vibrant cinematography by Javier
Aguirresarobe, it's there in the performances, it's there in the shot
composition, and it's there in the editing, and in pretty much anything
else I haven't mentioned yet.

The first forty minutes or so of "Vicky Cristina Barcelona" may be the
sort of romantic comedy (very good romantic comedy, at that) that the
advertising campaign seems to suggest it is, but for the rest of the
film there's the sort of pessimistic optimism that colors much of
Allen's work (if that makes sense, pretend you didn't read it if it
didn't), and let's just say it doesn't end well for these characters.
There's real complexity and intensity in this film, and all I have to
say is this: Woody Allen is back, the perceptive, intelligent examiner
of the human heart, that is, not what we've had for the past while. To
say this is one of his best films would be ignoring the fact that
through the 70's and 80's he pretty much made nothing but great films,
but I can at least say that this is on par with some of his better
work.