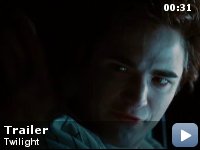 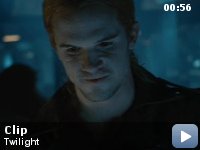 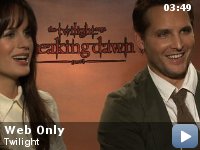 A teenage girl risks everything when she falls in love with a vampire.

Storyline
Bella Swan has always been a little bit different. Never one to run with the crowd, Bella never cared about fitting in with the trendy, plastic girls at her Phoenix, Arizona high school. When her mother remarried and Bella chooses to live with her father in the rainy little town of Forks, Washington, she didn't expect much of anything to change. But things do change when she meets the mysterious and dazzlingly beautiful Edward Cullen. For Edward is nothing like any boy she's ever met. He's nothing like anyone she's ever met, period. He's intelligent and witty, and he seems to see straight into her soul. In no time at all, they are swept up in a passionate and decidedly unorthodox romance – unorthodox because Edward really isn't like the other boys. He can run faster than a mountain lion. He can stop a moving car with his bare hands. Oh, and he hasn't aged since 1918…

Kristen Stewart wore hair pieces so they didn't have to waste time doing her hair, and therefore had more time to shoot.

Crew or equipment visible:
When Bella first arrives to her bedroom at Charlie's, as she stands near her bed, you can see a black wire between her jeans and her sweater.

Isabella Swan:
[voiceover]
I'd never given much thought to how I would die… But dying in the place of someone I love seems like a good way to go.

So bad it's ALMOST good.


NOTE: This review is the fair and unbiased opinion of someone with
extremely little knowledge of the Twilight series. I watched the movie
with a few die hard fans who I talked to after the movie, and I will
work some of their thoughts into the review.


Another much loved book series has been brought to life in the form of
Twilight, which despite having nothing in common with the Harry Potter
series, will undoubtedly draw comparisons because of the furor and
craze surrounding it. The main difference between the two, however, is
that the Harry Potter films are generally good and solid films.
Twilight, despite having done a couple things right, is not.

As a story, I will admit, Twilight is very catchy and interesting. Now
I see what all the hype is about. If I was a young girl, I would go
nuts over this stuff too. It's not just a vampire and a human falling
in love with each other, but because of the two leads, it's one of the
best on screen romances of the decade. This, however, is severely hurt
by the fact that Twilight boasts easily some of the worst writing and
editing I've ever seen. Let's not forget about the horrid VFX and pasty
makeup, either. It's one of the cheesiest films of the year, and can
definitely be put in the category of "so bad it's ALMOST good". Yes, I
just invented that category.

The 'allure' of the film appears to be the character played by Robert
Pattinson, who ironically was previously known for his role in the
Harry Potter series. Pattinson succeeded there and he more than
succeeds again, as he more than fit the bill for what he needed to do
with the character. Most actors would believe the only requirement of
the character is to be good looking, but Pattinson takes it a step
further and makes Edward Cullen very likable, trustworthy, and in the
end, a good hero for the audience. Kristen Stewart is sort of the queen
of not showing facial expressions, so she's perfect for the role of the
awkward teen Bella Swann. However, there were sometimes where her lack
of emotion bothered me.

Our supporting players…Well, none of them are noteworthy like
Pattinson is. The villain of the film is lame, cheesy, and played by an
actor I can't take seriously. Nikki Reed is probably the best as
Rosalie, Edward's 'sister', and the antagonistic vibe felt from her
adds a different side to the movie.

Okay, I don't really know what possessed the writer of this screenplay
to make it so horrible (was it the source material?), because the
dialog is just so bad that I laughed at serious moments. There's a lot
of intentional humor, mostly in the beginning when Bella and Edward
feel like awkward teens in love. I guess the movie moved along okay,
because I wasn't bored at all. I was either laughing at how stupid the
dialog was, laughing at some of the mildly funny jokes, or getting
pulled in by the electric chemistry between Stewart and Pattinson.

That, folks, is the reason most people will be able to sit through this
movie. The chemistry between the two leads, romantically and sexually,
is amazing. In this respect, Pattinson and Stewart are perfectly cast
and it makes me wonder if they could end up together in real life some
day. I was very surprised by how much I liked seeing their one on one
scenes, as cheesy and bad as the VFX and editing are.

As far as these visual effects go, I've seen a few vampire movies in my
day. I'm going to assume director Catherine Hardwicke has seen a few.
Well, she needs to watch a few more. Her fight scenes are horribly
choreographed, terribly shot, and lack the intensity required to
successfully rouse her audience. I could almost notice the wires the
actors flew across on. I noticed a ton of errors with the editing as
well, such as basic stuff like mouths moving and no words coming out,
and words coming out when no mouths were moving. The fight scene at the
end has wicked bad editing too, as the sound mixing also suffers as
well.

All in all, with Twilight, as bad a movie as it may be, I couldn't help
but stay interested in it because of the electric chemistry between the
leads. That alone kept me in the seat the whole time. It is technically
one of the worst films of the year, but the entertainment factor in the
above respect keeps it out of the company of movies like Disaster Movie
and College. I was actually lucky to see it with some of the fans of
the book, and all of them (5) described the movie as a 'disappointment'
and that the film went 'half way' with some subplots, either starting
and dropping them, or randomly starting them halfway through an
individual subplot. They were not happy at all with this movie, but
agreed on one thing: Robert Pattinson was the perfect Edward Cullen.
I'll agree with them on all those points and say that Twilight is
exactly what I thought it would be: so bad it's ALMOST good.