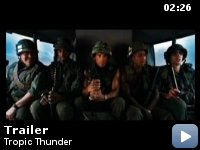 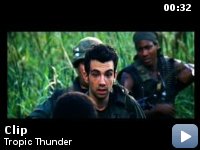 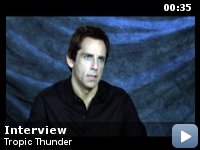 Through a series of freak occurrences, a group of actors shooting a big-budget war movie are forced to become the soldiers they are portraying.

Storyline
A film crew is in Southeast Asia filming a Vietnam-war memoir. It's early in the shooting, but they're already behind schedule and over budget. On the day an accident befalls the novice director, the cast and crew are attacked by a gang of poppy-growing local drug dealers, except the cast and crew don't realize these aren't actors who are stalking them. The thugs kidnap Tugg Speedman, an actor whose star seems on the decline, and it's up to the rest of the ragtag team to band together long enough to attempt his rescue. But will Tugg want to leave?

Tom Cruise co-stars as a vulgar movie mogul in this movie. Ben Stiller played Cruise in a sketch on Saturday Night Live in which Cruise played "Celebrity Jeopardy" and also played Cruise's idiotic stunt double "Tom Croose" in a sketch at the 2000 MTV movie awards.

Errors made by characters (possibly deliberate errors by the filmmakers):
When Lazarus is talking to Tugg about 'Simple Jack' he claims that an actor should never go "full retard" and mentions Peter Sellers (
Being There), Dustin Hoffman (
Rain Man), Tom Hanks (
Forrest Gump), and Sean Penn (
I Am Sam) as examples. He claims that Sean Penn is the only one of those to go "full retard" and come away without an Oscar after being nominated. However, Peter Sellers did not win an Oscar either. He received a Golden Globe award, while the Best Actor Oscar went to Dustin Hoffman for
Kramer vs. Kramer. (This is rectified in the Director's Cut DVD, where the line about Sellers is removed.)

Kirk Lazarus:
I'm just like a little boy, playin' with his dick when he's nervous.


I just got out of a midnight showing and I was absolutely blown away. I
fully expect this to be a mediocre movie at best, but it surprised me
in all aspects. It was well directed, acted, the action scenes were
actually very well done and pretty epic, and most of all it was
hilarious. I doubt I stopped laughing for more than a minute or two. I
don't want to give anything away so I will keep it brief, but do
yourself a favor and see this in theaters with friends.

PS. As a black man, I did not find Robert Downey Jr.'s character
offensive at all. He was probably the most hilarious character in the
movie.