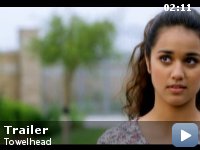 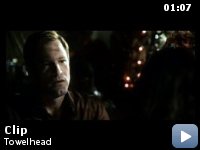 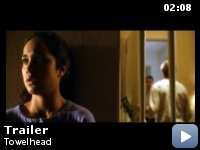 A young Arab-American girl struggles with her sexual obsession, a bigoted Army reservist and her strict father during the Gulf War.

Storyline
Against the backdrop of the first Gulf War, Jasira Maroun is 13, physically well developed but naïve and unable to say no. As puberty arrives, her mother sends her from Syracuse to Houston to her curt, up-tight, Lebanese-born father. Over the next few months, Jasira must navigate her father's strict indifference, her discovery of sexual pleasure, the casual racism of a neighbor boy and her classmates, the sexual advances of the boy's father, the proffered friendship of a pregnant neighbor, and her attraction to Thomas, an African-American classmate whom her father forbids her to see. Things happen to her, but can she take responsibility and control, or is tragedy inevitable?

Taglines:
How Can You Find Yourself if No One Can See You?

This film, based on the book Towelhead by Alicia Erian, debuted at the 2007 Toronto Film Festival with the non-controversial title Nothing is Private. However, after consultation with Erian and Warner Brothers, the filmmakers decided to release the movie in the United States and other countries with the same title as the book, obviously an ethnic slur. The title was met with controversy and protests from the Arab-American community. Some complained about the slur itself, others accused Warner Brothers of choosing a buzz-generating controversial title that was misleading since the story centers more on Jasira's sexual behavior than her ethnicity. This and other topics are discussed on the DVD's two panel discussions.

Anachronisms:
When Jasira is talking to her mother on the payphone when her father has locked her out, there is a "We Card" sticker visible in the convenience store window. The "We Card" tobacco program was not started until 1995, several years after the movie takes place.

Barry:
You're beautiful just the way you are, Jasira. Those other girls are just jealous because you're growing up faster than they are. And you're prettier than they are. Listen, don't let it get you down. Stupid names they're calling you. This year – just gimme a second
[wets the razor]

Barry:
this year, your gonna shut them up. Only, probably you shouldn't tell your mom about this.


Just left the Sundance premier. They changed the title back to
Towelhead, kind of a harsh turn-off while choosing a movie, but I guess
that was the name of the semi- autobiographical novel. The author was
present and looks well recovered from her childhood.


I can see why many reviewers hate this movie. It's cringe-worthy to
watch the sexual awakening of a pubescent teen, when her parents and
other important adults are childishly self-centered, in contrast to her
own childlike innocence, honesty and vulnerability. That contrast and
that cringe are what make it real and relevant. An unnerving part of
the story is that the protagonist is never a victim. She is too
inexperienced and too unmentored to act in what an adult would consider
her own best interest, at least at first. But, she never participates
in anything against her will. She is never denied her freedom, at least
no one who tries to restrict her has the will and persistence to
succeed for long. Hers is not to suffer, then be redeemed and live
happily ever after. Hers is to introduce sex into her life this way,
then go on.

The story engages all types of Americans around this kid's ambivalent
choices, a socially liberal me-generation mom, a conservative Christian
Arab Dad, right-wing white Christian neighbors, liberal social activist
neighbors, a middle class black friend, and a Latina mom- figure who
mistakes her of one of her own. The acting is great. As one would
expect, there's lots of room for humor. Once over the cringing,if you
did get over it, it was an engaging and thought-provoking movie.