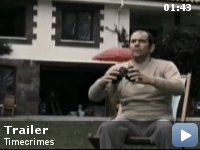 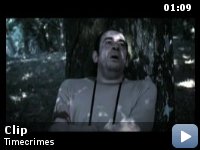 A man accidentally gets into a time machine and travels back in time nearly an hour. Finding himself will be the first of a series of disasters of unforeseeable consequences.

Storyline
Hector is an ordinary man who's moving to a new house with his wife. One evening, while he's looking through his binoculars, he sees a naked girl in the woods. He decides to go there just to find that same girl laying on a rock. Suddenly, a man with a pink bandage covering his face, stabs Hector in his arm with scissors…

Héctor:
[first lines – everything has fallen out of the back of his car]
Clara! Clara! Clara! Didn't you hear me calling you?

Clara:
You called me?

Héctor:
Yeah. You didn't hear me?

Héctor:
This was the one you wanted, right?

Clara:
Yeah. And the fertilizer?

Clara:
Put it there.


"Timecrimes" was a movie I almost didn't see. It seemed interesting,
but since "Primer" I wasn't sure if I wanted to wrap my mind around
another time travel movie. The director, Nacho Vigalondo told us this
was his world premiere and he was very nervous giving his introduction.
After about 90 minutes, I realized my second movie at Fantastic Fest
2007 may be the best one I see all week. "Timecrimes" was an engaging
movie that is easy to follow, despite it's complex plot. I would hate
to give away even the smallest of details, the title says everything
you need to know. Even though I felt like I was in the driver's seat
the whole movie, there were still surprises throughout that kept things
interesting until the closing credits. The journey taken by Hector
(Karra Elejalde) develops his character beautifully, and he is
complimented by a small and effective cast. It would be a crime if this
movie doesn't get the distribution it deserves. The Q&A afterward
revealed some interesting behind the scenes stories and some info that
made me want to see the movie again. Fortunately the buzz from our half
full screening was enough to sell out the second screening at the
festival. The film won Best Picture at Fantastic Fest 2007, was the
Silver Medal winner for Audience Favorite, and was the highest rated
film at the festival. If you get a chance to see this movie, DO IT!!


***UPDATE*** "Timecrimes" has been picked up by Magnolia Pictures.