Then She Found Me 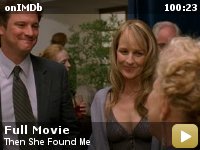 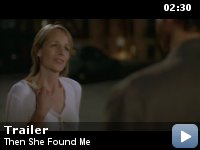 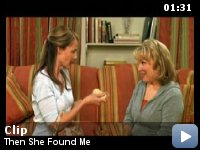 A New York schoolteacher hits a midlife crisis when, in quick succession, her husband leaves, her adoptive mother dies and her biological mother…

Storyline
A New York schoolteacher hits a midlife crisis when, in quick succession, her husband leaves, her adoptive mother dies and her biological mother, an eccentric talk show host, materializes and turns her life upside down as she begins a courtship with the father of one of her students.

(as Rabbi Kenneth A. Stern)

Taglines:
Life can change in a heartbeat.

When Tim Robbins directed his first feature film,
Bob Roberts, Helen Hunt appeared in a brief cameo as a television news reporter. When Hunt made her feature directorial debut with this film, Robbins returned the favor and appears briefly as one of the interviewees on the Bette Midler character's talk show.

Continuity:
The passenger side shoulder belt in April's car is present for Bernice's scene and missing for Frank's.

Frank:
Why are you talking so fast?

April Epner:
Because I don't think Jimmy Ray should know that I'm here.

Frank:
Well if we're going to be family he should probably know he didn't just dream you up half-naked in his house and besides he knows you're here.

April Epner:
No he doesn't! I was very careful to wait until he was a safe distance away.

Wretched Script Cannot Be Redeemed by All Star Cast


"Then She Found Me" is a wretched movie, and it should not be. The
talent here is undeniable: Helen Hunt, Colin Firth, Matthew Broderick,
Bette Midler. The problem? An unforgivably awful script. Can anyone in
Hollywood read? Hollywood is a world capital of entertainment, of
magic; there is so much talent there. And yet, year after year, these
awful scripts are greenlighted and talented writers starve. What gives?


The main character, April Epner (Helen Hunt) is never fleshed out. What
we do know about her makes her incredibly unappealing. She's obsessed
with her plump, middle-aged, boy-man husband (Broderick) who has left
her to live in his mother's house. April is shrill and rude to her
dying mother. She's manipulative and callow in her interactions with
Colin Firth, the man all sensible women love and would treat like the
treasure he is. In a particularly painful scene, Frank (Firth) makes a
poignant confession of love to April, and she blows him off in order to
gripe to her husband in a cell phone call. I was literally shouting at
the screen, "Run, Colin, run! Get away from this nasty loser female as
fast as ever you can!" It doesn't stop there. April attempts to have a
quickie with her husband in the back seat of a car. On a busy city
street. In broad daylight. With the car door open. It was such an ugly,
gratuitous scene. It marked April as someone suffering from borderline
personality disorder. But it doesn't stop there. April casually invites
both her husband and her boyfriend to her gynecologist's office for an
exam, in stirrups and johnny coat, to ascertain that she is pregnant,
by her husband. WHY should we care about this woman? Why should Colin
Firth be attracted to her? What inspired his poignant love confession?
Nothing. There is nothing on screen, nothing in the script, that ever
fleshes his attraction out.

Speaking of "flesh" … if you read comments here or on the web, you can
see that most viewers were fixated on how haggard Helen Hunt looks. She
is very thin, and time has not been kind to her face. In some scenes,
it is impossible to look at her and not want to sit her down and get
some food into her, she looks that much like a refugee from some
catastrophe. Some viewers applauded Hunt for being "brave" and allowing
the camera access, but focusing on Helen Hunt's courage utterly
detracts from ever registering April Epner as a flesh and blood human
being. You're not thinking about April Epner, you're thinking, "Hmm…how
could Helen Hunt change her look?" Similarly, Bette Midler is never
convincing as the character she is playing. She is always Bette Midler,
bodacious saloon singer, breezing through a film with a script that is
decidedly unworthy of any attempt on her part to bother to pretend to
be anyone but Bette Midler.

Failed films like this are so painful because there are so few movies
made for women over forty. The glory days that could produce a script
like Mankiewicz's "All About Eve" are long behind us. Drek like this
make us miss classics like that all the more. Older women do lead
interesting lives. There are so many real questions that this film
could have explored for a forty-plus schoolteacher whose husband wants
to leave her. This film ignored all of those real questions and just
plopped Colin Firth, the perfect man, and Bette Midler, STAR, in as
phony, bogus attempts to stir up some kind of a plot. Sorry – without
writing talent and insight, which this script utterly lacks – even
starpower like Firth's and Middler's can't create a worthy film.