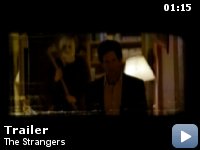 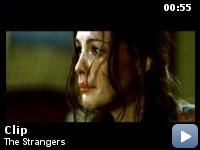 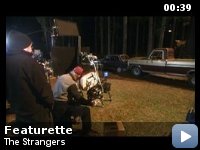 A young couple staying in an isolated vacation home are terrorized by three unknown assailants.

Storyline
After returning from a wedding reception, a couple staying in an isolated vacation house receive a knock on the door in the mid-hours of the night. What ensues is a violent invasion by three strangers, their faces hidden behind masks. The couple find themselves in a violent struggle, in which they go beyond what either of them thought capable in order to survive.

Man in the Mask

During filming, in order to get an actual reaction from Liv Tyler, Bryan Bertino would tell her where to expect a loud bang from, but would then have the loud noise come from a completely different direction.

Continuity:
When Dollface takes off her mask, she is wearing a jacket. The camera goes elsewhere, then goes back to Dollface, without a jacket on.

Narrator:
What you are about to see is inspired by true events. According to the FBI, there are an estimated 1.4 million violent crimes in America each year. On the night of February 11, 2005, Kristen McKay and James Hoyt left a friend's wedding reception and returned to the Hoyt family's summer home. The brutal events that took place there are still not entirely known.

What a waste of time

*** Warning *** Spoilers *** For such a short film, this managed to
cram in every senseless cliché of the so-called horror genre. '…Girl
runs from bad guys, girl trips, girls falls and hurts herself, girl
whimpers, duh…' No character development, no depth, no sympathy for
the characters. '… bad guys are harassing your house and threatening
you, so OF COURSE you get hysterical, cry, and seek out every spooky
noise…' So bad guys are hacking at your front door with an ax, you've
got a loaded shotgun in your hand, but you don't shoot, you throw a
chair at the door, Oh Wait, I've got a gun! But by the time you think
to shoot the bad guys are gone. So your under attack from bad guys and
it's just you, your girlfriend, and a loaded shotgun, so instead of
hunkering down and letting them come to you to get shot, you leave your
girlfriend alone in the un-secured house while you wander off to the
tool shed to find and old ham radio. Sure, makes sense. So you go visit
your friends and someone shoots out your windshield, do you: A- drive
off fast and call 911, B- call 911 then run in the house to check on
your friends, or C- dust yourself off, sneak into the house quietly,
without ever bothering to wonder why your friend's car is wrecked,
who's pickup truck that is, why the house is trashed, don't bother
turning off the loud stereo, or calling out your friends' names, in
fact don't even bother to look behind you to see if maybe the people
who shot out your windshield are still around. That's right – C
!?!Everyone who died in this movie deserved to die for being such
mindless, spineless, insipid, whimpering idiots. Maybe if you've never
seen a movie before, ever, or if you've had recent head trauma, or
maybe if you're Amish this movie might scare you. Maybe. Don't waste
your time or money.


REVISION::: it's now Sunday 6/1. I originally posted the above comment
after an advance screening of this movie late-night on thursday 5/29
(because I work at a movie theater I get to see all the movies before
they're released.) So I've noticed something peculiar… there are, as
of now, about 8 pages of comments on this film. About 3 pages of
comments before mine (meaning before the movie came out) all gave The
Strangers 9 or 10 stars, glowing reviews, and taglines like "best
horror movie ever," "scariest film ever," and "awesome." But then, if
you look at the dates of submission, 95% of all the comments posted
after the movie was released say it's lackluster at best,
anticlimactic, boring, lame, and not worth watching. So, I wonder, is
that a coincidence, or maybe, just maybe, were all those people who
posted great comments prior to the movie's release doing it for some
other reason? Were they being paid to hype the film? Do they work for
the production company? Or is it all just a big coincidence? Hmmm….

TagsUSA
Indiana Jones and the Kingdom of the Crystal Skull
JCVD