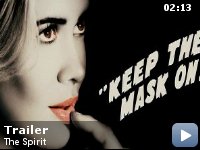 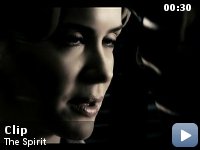 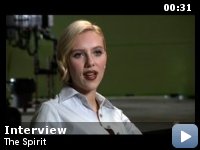 Rookie cop Denny Colt returns from the beyond as The Spirit, a hero whose mission is to fight against the bad forces in Central City.

Storyline
Down these mean streets a man must come. A hero born, murdered, and born again. When a Rookie cop named Denny Colt returns from the beyond as The Spirit, a hero whose mission is to fight against the bad forces from the shadows of Central City. The Octopus who kills anyone unfortunate enough to see his face who has other plans. He's going to wipe out the entire city. The Spirit tracks this cold hearted killer from the city's rundown warehouses, to the damp catacombs, to the windswept waterfront all the while facing a bevy of beautiful women who either want to seduce, love or kill the masked crusader.

(as David B. Martin)

Taglines:
He's something the world needs…

Some scenes where shot using a new digital camera called The Phantom that can shoot at up to 1000 frames a second. Most of the film was shot with Panavision Genesis cameras.

Continuity:
When young Denny and Sand run out of the rainstorm into the doorway, Denny's coat is not wet.

The Spirit:
[the Octopus has demonstrated a serum on a cat, muffins]
The cat… she is all the reason I need. I will kill you.


I must say that I was somewhat excited when my friend told me she got
us tickets to the premiere of "The Spirit", especially since I've never
been to a real premiere. It was an entertaining experience, all except
for when the film was rolling.


I liked Sin City a lot, and I thought 300 was intriguingly well made
and quite entertaining. Let's just say that compared to 300, "The
Spirit" entertains more like Howard the Duck. The entire film seems
like a total farce, an unfortunate mockery of Miller's unique style
himself. It has been a very long time since I've seen a film with such
little (to no) heart, and hardly any soul. I must say that Sarah
Paulson gave the greatest performance by far of anyone else, as the
Spirit's unconventional doctor. She is the sole source of any feeling
or depth in the film. Macht was also at his best in the lead role when
sharing scenes with Paulson, otherwise, he barely filled the part. I
don't know if that was his fault however, given that the character
himself was depicted with very little depth overall. I never read the
graphic novel, but I'm going to go ahead and guess that this doesn't do
it justice. How can I say that? Because novels build key characters
into "people" that you care about, whether you hate them or love them,
the characters stimulate your mind on some level or another. This is
far from the case in this film. There is very poor development of the
characters, which the majority of potential watchers are unfamiliar
with. Sam Jackson has unfortunately chosen another terrible role, as
the non-intriguing villain, the Octopus. Jackson however does give us
some of his crazy wild eyed antics that we've grown to accustomed to,
although his character falls flat for the most part, especially
considering his opposite on the screen, Scarlett Johansen. It almost
seems as if Miller was asleep on the set when her scenes were shot.
She's THAT bad in this film, with a deeply sub par android-like
performance. Eva Mendes did what she could to somewhat save the film
from being a complete and total joke, although it's pretty close to
being just that. She plays the bling digging female lead opposite
Macht. Now quite possibly the most annoying character(s) ever portrayed
on film are the Octopus's cloned henchmen, which were frighteningly
reminiscent in annoyance levels of………. dare i say it… Jar Jar
Binks. My four year old nephew would surely find some entertainment
value there.

This film ultimately succumbs to its poor writing and direction, which
are almost cleverly masked by the signature visual style of Miller,
which is hypnotizing at times. Unfortunately, it's hardly hypnotizing
enough to mask the true, soulless identity of "The Sprit".