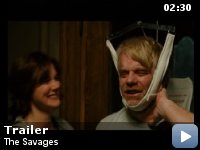 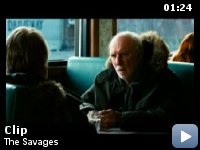 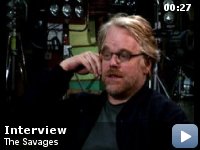 A sister and brother face the realities of familial responsibility as they begin to care for their ailing father.

Storyline
Jon and Wendy Savage are two siblings who have spent their adult years trying to recover from the abuse of their abusive father, Lenny Savage. Suddenly, a call comes in that his girlfriend has died, he cannot care for himself with his dementia and her family is dumping him on his children. Despite the fact Jon and Wendy have not spoken to Lenny for twenty years and he is even more loathsome than ever, the Savage siblings feel obliged to take care of him. Now together, brother and sister must come to terms with the new and painful responsibilities with their father now affecting their lives even as they struggle with their own personal demons Lenny helped create.

Director Tamara Jenkins contacted Carter Burwell to score the movie. Burwell had already committed himself to score
No Country for Old Men, so he refused, but recommended Stephen Trask to Jenkins.

Factual errors:
Jon Savage drives his Polish girlfriend to the airport at 6:30 AM, in broad daylight. But in November in Buffalo, it would be pitch dark at this hour (even on November 1, sunrise isn't until 7:46).

Student:
What is the difference between plot and narrative?

A humane film about human experiences.


To put it simply, "The Savages" is the most human look at life I've
seen in theaters this year. It's incredibly easy to relate to if you
have ever ever seen some relative or family friend of yours get old and
then forget who you are due to some sort of elder person's disease. It
features three of the year's finest performances from Laura Linney,
Philip Seymour Hoffman, and Phillip Brosco, all of whom radiate on the
screen as real, ordinary but complex, people. Linney and Hoffman play
brother and sister, two writers who have an argumentative but loving
way of getting along. Brosco plays their father, who has done something
really, well, "dirty," and has drawn the attention of the family that
had been caring for him, who no longer wish to do so.


From there, Linney and Hoffman's characters meet up with the father
whom they haven't seen in years, and who was never very compassionate
towards them. However, their father has dementia, and slowly begins to
forget who they are. Instead of their main concern being whether or not
he's kind to them, the kids are afraid they won't be able to
communicate with him at all. The way Tamara Jenkins handles this, from
both the perspective of the kids and the perspective of the father, is
brilliant. She really understands the way family relations work, as her
film is spot-on in that aspect.

The three performances are all great for their own reasons. Linney
plays a woman who is really confused with her life: she's having an
affair with a married man who's ten years older than her, she lies to
everyone she knows about things that aren't worth it, and she is having
a lot of trouble getting produced as a writer. Hoffman, her older
brother, has a really relaxed humanistic side to him, always countering
Linney's loud worrisome actions with a calm, mind-processing technique.
The chemistry between this brother-sister duo – probably the only
opposite-sex-adult-aged-duo that doesn't have any romantic elements
(for obvious reasons) – is one of the most realistic works of chemistry
you'll find in a theater this year. Throw in Phillip Brosco – who
absolutely conquers the dementia that his character has (my aunt has
dementia, so I see her all the time and know that his face and way of
talking and mannerisms are all spot on) – and you've got three
characters who are so strong alone that they're enough reason to see
this movie, funny-touching script and story aside.

While all three performances were incredible, I'd have to say that my
favorite performance came from Hoffman. Linney played the
confused-wreck card very well, but it's not like she's the first
actress to confront or conquer that territory. Brosco was astoundingly
realistic as a man with dementia, but his role doesn't carry very far
beyond that. Hoffman's performance, while not "loud" in any way, is
simply the best portrayal of an ordinary human being I've seen in
years, if that makes any sense. Everything, from the way he reacts to
what people say, to the way he talks, to the way he expresses emotion
when he's feeling it – all of it is executed so well that I can't
believe that he was actually acting.

The ending of the film is very humane. It doesn't have any major twists
or bangs, but it doesn't end on a nothing-note either. It teaches us
that the lessons we learn from one experience can help us deal with the
next, and it's the many small messages like this and the very life-like
feel of the film's craft that make it one of the most special films I
had the experience of seeing at a theater this year.