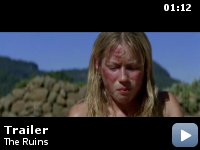 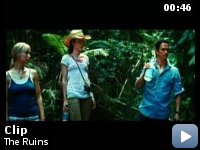 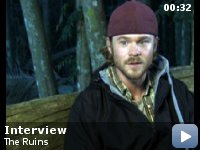 A group of friends whose leisurely Mexican holiday takes a turn for the worse when they, along with a fellow tourist embark on a remote archaeological dig in the jungle, where something evil lives among the ruins.

Storyline
While on vacation in a resort in Mexico, the Americans Jeff, his girlfriend Amy, her best friend Stacy and her boyfriend Eric befriend the German Mathias in the swimming pool. Mathias invites the group to visit the ruins of a Mayan temple with his Greek friend Dimitri in an archeological field where his brother Henrich and his girlfriend are camped eighteen kilometers far from the resort. They hire an old taxi and when they reach the spot, they are surrounded by Mayan villagers armed of revolver, rifle and bow-and-arrow that kill Dimitri and do not allow the group to leave the place. They climb a construction covered of creepers with red flowers, and remain under siege of the locals. When they hear a cell phone in the bottom of a well, Mathias decides to seek the apparatus using a rope that breaks and he has a serious accident breaking his back. Amy and Stacy go to the bottom of the mine to rescue Mathias and they find many corpses covered by the climbing plants; further…

The Greek characters, while present in the novel, were not originally included in the screenplay. Director Carter Smith convinced screenwriter Scott B. Smith to add them back into the story.

Continuity:
Amy loses her glasses while trying to escape from the vines. When she and Stacy are pulled out of the ruins, she has no glasses. Two scenes later, she is wearing glasses again. They disappear for the rest of the film.


I wasn't too psyched for this movie beforehand, but I got a free pass
and figured why the hell not and wound up seeing one of the better
horror films I've seen in a good while. Thes best thing I can say about
"The Ruins" is that it plays its hand honestly, there's no tweeny BS,
no winking at the camera, it's just a classic situational horror film
that just keeps getting from bad to worse in the best possible way.
Like I said, I got in for free and I kinda feel like I owe 'The Ruins"
10 bucks. But as a small caveat, I saw this film with a bunch of
pretentious jackasses sitting behind me and surprise surprise, they
didn't like it. So if you fall into that category than do yourselves
and anyone who can enjoy a straight shot horror film a favor and stay
away.

TagsAustraliaMexico
Teeth
Day of the Dead