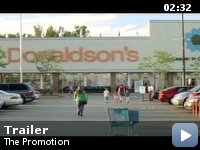 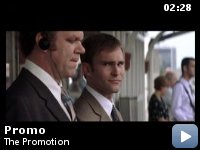 Two assistant managers of a corporate grocery store vie for a coveted promotion.

Storyline
At 33, Doug Stauber is ready for a promotion. He's married, wants to buy a house, and is assistant manager at a Chicago supermarket that's building a new store in his neighborhood. His boss tells him he's a shoo-in to manage the new store, then, a rival appears – Richard Wehlner, transferred from Canada. Richard has a deeper resume than Doug, is really nice, has a wife and daughter, and wants the promotion to manager too. How should Doug behave toward Richard – as a friend, a colleague, a competitor, or an enemy? Richard, it seems, has demons and a past, but with the help of motivational tapes, he's resolved to succeed. Corporate and personal tests await the two men.

Though Donnie Wahls (Nathan Geist) is referred to as a bit too "junior" in the film, in actuality Geist had to pluck gray hairs before each day of filming during production.

Continuity:
The size of the joint that Richard is smoking on the loading dock changes from when Richard is talking to his wife to when Doug catches him.

[Richard explains to the board of directors the sign that cited the deli clerk as employee of the month for "cutting the cheese."]

Richard:
'Cutting the cheese' simply means 'cutting the actual cheese'. It doesn't have a double-thing? So I just missed it. Because in Canada, it's 'cracking'.

Richard:
It's 'cracking', in Canada, yeah. We crack the cheese.
[Long pause between Richard and the board of directors]

Richard:
Cracking it? Cracking the cheese? So I simply, really believed that Rogelio had been given an inter-deli award… for cutting the actual cheese. I'm sorry.
[…]

Mediocrity at it's most benign


Ever sat through one of those movies that you're hoping something's
going to happen – and it doesn't? The Promotion is one such movie.
Here's the uninspiring story of two guys – both intent on being
promoted within a corporate supermarket franchise.


That's the premise – short and sweet. Naturally there's some tension
between both men competing for the position, but overall the humor is
weak; the competitive nature of the applicants is unconvincing and the
story flat-lines a couple of minutes into the film.

John C. Reilly is the hopeful manager from Canada while the incumbent
is Seann William Scott.

There's nothing to it, nothing to expect and with only a hint of
infidelity or upheaval, it's best left out of the spotlight –
preferably collecting dust someplace in a $1 rental outlet…