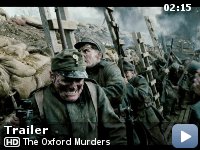 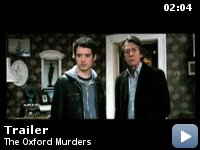 At Oxford University, a professor and a grad student work together to try and stop a potential series of murders seemingly linked by mathematical symbols.

Storyline
At Oxford University, a professor and a grad student work together to try and stop a potential series of murders seemingly linked by mathematical symbols.

During the initial introduction between Martin (Elijah Wood) and Mrs. Eagleton (Anna Massey), they speak about her replica of the German Enigma cipher machine. Mrs. Eagleton states everything was done manually to break the Enigma messages. Mrs. Eagleton states "there were no computers in those days (World War II)" and "calculations were done by hand." Actually, the British, working in Bletchley Park, did build a computer called Colossus by January 1944. Colossus was constructed with up to 2,400 vacuum tubes and programmers used approx. 1" wide paper tape to store programming. By the end of the war, Bletchley Park was using 10 Colossus computers to break various German cipher machines, including Enigma.

Continuity:
During the camera panning at >20min. when Wood is riding his bike and parks it by the fence and passes the tree, the camera cues anew. Wood's arm nearest the camera after he exits the tree does not match the way it was positioned when he entered behind the tree.

Arthur Seldom:
Miss Scarlet is now an electron, okay? And you're looking at her through a keyhole or a particle accelerator – as you wish – and every time you look at her, Miss Scarlet will have changed her appearance or her position because the very fact that you observe her alters her atomic state. How about that?

Martin:
Don't try to confuse me with tricks.

A worth seeing mystery movie


Fresh out of the cinema I have a very good feeling about the movie. My
first impression is that it is definitely worth seeing. Alex de la
Iglesia (the director of for instance "El Dia de la Bestia" or "La
comunidad") makes this time a mystery movie following the classical
parameters. A nice plot, specially for those who like mathematics or
logic in general, with intricate moves and very nice dialogs by John
Hurt and Eliah Wood (who, by the way, looks like a pretty solid actor.
I had only seen him playing Frodo and was a bit worried about him
getting stuck on that character, not at all) who basically follow the
classical thoughts about "the perfect murder" and in the philosophical
search for absolute truths.

Being a fan of de la Iglesia, whose sense of humor is well known and
pretty easy to recognize, I am quite happy to see that he is also able
of making a genuine mystery film, with everything you expect to see on
it, twisted arguments, funny characters ("Podorov", and of course,
Dominique Pinon from, among others, Delicatessen) and a extremely good
film-making, nice sequences, good mystery music, etc.

To me, being a bit of a geek, the mathematical references are too
obvious, the series shown are too well known, they are nice
nonetheless, but for instance why to talk about Fibonaci numbers (which
were also in the 'Da Vinci Code' when one can talk about many other
nice and funny series? On the other hand being a mystery movie's lover
one always enjoys the sequences which are clear homage's to previous
classics, pay attention and you'll enjoy.

Let me end up by mentioning the very nice work of Leonor Watling (you
may have seen her before in, for example Almodovar's "Talk to her", her
meaning she), who, apart from being a really good actress, of being
extremely beautiful and attractive is also a pretty good singer! It was
quite a pleasure, being Spanish myself, to see her playing an important
role with such a great casting!

So, watch it by yourself, the first "serious" Alex de la Iglesia movie,
and he does a pretty good job!