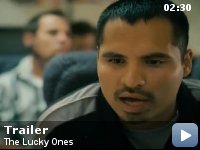 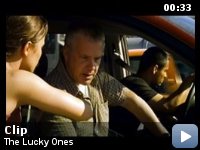 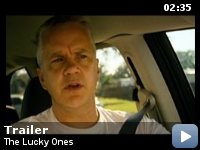 The story revolves around three soldiers — Colee, TK and Cheever — who return from the Iraq War after suffering injuries and learn that life has moved on without them…

Storyline
The story revolves around three soldiers — Colee, TK and Cheever — who return from the Iraq War after suffering injuries and learn that life has moved on without them. They end up on an unexpected road trip across the U.S., with Colee on a mission to bring her boyfriend's guitar back to his family because he saved her life, TK seeking confidence to face his wife after a shrapnel injury that threatens his sexual function and middle-aged Cheever planning to hit the casinos in a desperate effort to pay for his son's college tuition.

The drinks that Cheaver's wife offers Colee and T.K. are Coca-Colas.

Factual errors:
Cheaver could not use his $20,000 re-enlistment bonus for his son's tuition. The bonus would be given in increments and would be heavily taxed. He would not get more than $8,000 of that initially.


Three soldiers are home from Iraq; a 40-ish Tim Robbins out for good
and the young Michael Pena and Rachel McAdams on a thirty day leave.
Each has their own problem that they are faced with at the beginning of
the film. Robbins comes home to a wife who wants a divorce and a son
who needs $20,000 for college, Pena suffered a wound that has made him
impotent and McAdams lost her friend and wants to find his family in
order to return his guitar and live with them since she's lost any ties
with her own. Think every problem is going to be solved in a little bow
by the end? Well, you'd be right. Think that it's going to really
typical and schmaltzy? Not so much on that one. It seems like a film
that's made for the obvious ups and downs throughout but it actually
manages to be quite original and refreshing. Instead of feeling like a
film that's just about resolving the individual situations, it's a lot
more carefree and a lot more about these three people simply enjoying
life together and keeping one another joyful.

Of course there are many different stops on the way to their ultimate
destinations in order to give us some situations of them interacting in
the real world, but each one is a lot of fun and we gain a little more
depth to the characters at each stop. All of the characters are
well-fleshed out and don't feel like just another retread of
stereotypes we've seen over and over again. One of the things that
really surprised me is that when a little romance starts to bloom
between Pena and McAdams, I didn't roll my eyes like I would have
expected but instead I smiled and enjoyed watching this flirtation grow
between the two of them in a non-typical way. And all the way through
we are treated to three strong performances from three solid actors.

The real star is Rachel McAdams, who I'd say is Oscar-worthy. She keeps
the laughs coming all the way through and steals every single scene
with her bright eyes and southern drawl, but you can tell that there is
real emotion brimming just under the surface. She's a girl who has
every reason to hate life with a fury, but she remains optimistic and
tries to get those around her to enjoy living just as much as she does.
One scene in particular, when she finally meets the family of her
fallen friend, is a showcase for what an extraordinary actress she is.
This is her best performance by a long shot, and definitely one of the
best of the year. The Lucky Ones is something that could have been
obvious and clichéd, but ended up being just the opposite; a refreshing
and very well-acted story that I wish wasn't destined to be forgotten
come awards season.