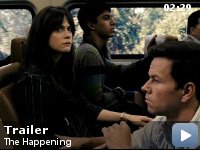 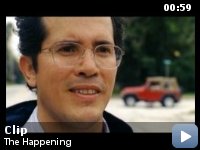 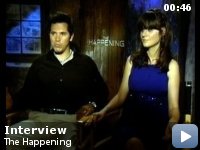 A strange, horrible and unprecedented crisis begins in Central Park. A high school science teacher, his wife and a young girl do what they can to survive it.

Storyline
Elliot Moore is a high school science teacher who quizzes his class one day about an article in the New York Times. It's about the sudden, mysterious disappearance of bees. Yet again Nature is doing something inexplicable, and whatever science has to say about it will be, in the end, only a theory. Scientists will bring out more theories, but no explanations, when a more urgent dilemma hits the planet. It begins in Central Park. Suddenly and inexplicably, the behavior of everyone in the park changes in a most bizarre and horrible way. Soon, the strange behavior spreads throughout the city and beyond. Elliot, his wife, Alma, and Jess, the young daughter of a friend, will only have theories to guide them where to run and where to hide. But theories may not be enough.

Continuity:
At the beginning of the film when the two girls are sitting on the park bench, the one unaffected girl is talking to her friend, but she doesn't respond. Claire, the unresponsive one, is looking down at her book, her eyelids nearly closed, but when the angle changes, she is looking straight ahead instead of down.

Woman Reading on Bench with Hair Pin:
I forgot where I am.

Woman Reading on Bench:
You're at the place where the killers meet to decide what to do with the crippled girl.

This is a joke, right?


Allow me to provide some background information on my relationship with
the films of M. Night Shyamalan: I adored "The Sixth Sense" and still
think of it as one of the best films of 1999 and one of the best
supernatural thrillers in ages. "Unbreakable" was a fascinating take on
the superhero genre. I loved parts of "Signs" to bits and consider the
sequence in the basement towards the end of the film one of the finest
examples of suspenseful build-up in recent film history. I even liked
"The Village" and could easily dismiss "Lady in the Water" as a mere
misfire. I was greatly anticipating "The Happening", especially as it
seemed to be echoing one of my favorite guilty pleasures- the paranoid
70's sci-fi thriller.


Let's get one thing out of the way- "The Happening" is unbelievably,
impossibly, ridiculously, hilariously, inconceivably bad. Normally I
would refuse to rate any film that had any good scenes or that was
well-directed less than four out of ten, but "The Happening" has to
have one of the worst scripts among recent big-budget Hollywood films.
It's absolutely shocking how retarded the logic behind this is and how
poor so much of the dialogue is. This script began as "The Green
Effect", a tremendously poor (trust me, I read parts of it) script by
Shyamalan that was soundly rejected and eventually reworked into "The
Happening". Having seen the critical reaction to "The Happening" prior
to going into the film I found myself pleasantly surprised by basically
the first thirty, forty minutes of the film. It was nothing special but
it had something going for it, Shyamalan's direction was top-notch, and
Wahlberg was playing the sort of goofy science teacher I'd loved (and
loved to hate on occasion) in high school.

Then the descent began. The bulk of this film is some of the most
hilariously awful crap produced by a talented filmmaker since
Schaffner's "Sphinx". Shyamalan, who was using close-ups and steadicam
shots to frankly brilliant effect early on, begins to use the same
shots to comical effect. There is one painfully, painfully long
close-up of Mark Wahlberg pleading for time to think and then calling
for his group to 'keep ahead of the wind' that is up there with Nicolas
Cage in "The Wicker Man" in terms of hilariously awful acting. That
scene may very well be the turning point in the film, with Wahlberg's
acting becoming more ridiculous by the second, culminating in a
performance that essentially wipes from memory all his tremendous
recent achievements as an actor. I don't blame Wahlberg for this, I
blame Shyamalan. Wahlberg claims Shyamalan tried to force him into real
paranoia so his performance would work better. What happens here (no
pun intended) is that Wahlberg ends up looking amazingly uncomfortable
for the last hour of this thing and struggles to deliver any reasonable
line deliveries.

Okay, I do have to credit Zooey Deschanel for making this movie
watchable. Besides being amazingly, ridiculously gorgeous she is a fine
actress and creates a sympathetic character (and a fairly well-drawn
one at that- one of the few pros in Shyamalan's script). There's also
the score: oh my it's gorgeous. Seriously, ignore this film and just
buy the score CD by James Newton Howard- it's brilliant.

"The Happening" starts out well but ends up being an absolute
embarrassment. I was prepared for a mediocre offering- perhaps a
misguided effort such as "Lady in the Water". I was not expecting a
disaster on the level of "The Happening". Its last forty minutes and
especially its last ten minutes or so are among the worst I have seen
in a long time.

Have you ever wondered if it was possible for a film to go from
enjoyable to absolutely horrendous in the space of ten or fifteen
minutes? "The Happening" is proof that it can, pardon the (intentional)
pun, happen.