The Good, the Bad, the Weird 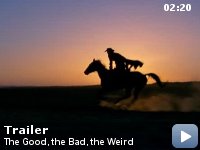 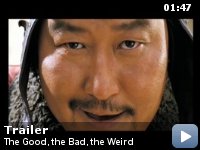 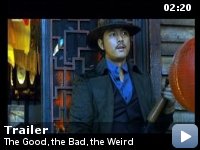 The story of two outlaws and a bounty hunter in 1940s Manchuria and their rivalry to possess a treasure map while being pursued by the Japanese army and Chinese bandits.

Storyline
A guksu western. Three Korean gunslingers are in Manchuria circa World War II: Do-wan, an upright bounty hunter, Chang-yi, a thin-skinned and ruthless killer, and Tae-goo, a train robber with nine lives. Tae-goo finds a map he's convinced leads to buried treasure; Chang-yi wants it as well for less clear reasons. Do-wan tracks the map knowing it will bring him to Chang-yi, Tae-goo, and reward money. Occupying Japanese forces and their Manchurian collaborators also want the map, as does the Ghost Market Gang who hangs out at a thieves' bazaar. These enemies cross paths frequently and dead bodies pile up. Will anyone find the map's destination and survive to tell the tale?

Director Jee-woon Kim says he'd like this to be called a "kimchee western", after the Korean food made with fermented cabbages. He says he thinks the plot and film are spicy and vibrant, like the Korean culture and people.

Anachronisms:
When Park Chang-yi spins a supposedly 78-rpm record in Kim Pan-joo's office, the record he play is a 33 1/3 rpm Angel record. Angel records were not around in the 1940's (the record label is from the 1970's). Furthermore, Angel records specialize in classical music and would not release a record of Glenn Miller music even if they had been around at the time of this movie.

Park Chang-yi:
I'll play a game with you two. A way to get rid of both of you at once. A fun game. A game to decide who is best, where no one knows who will shoot whom. Where only one man survives. Right here, right now. I'll kill both of you.

Park Chang-yi:
We'll see about that.


This is a real blast. A London Film Festival viewing this afternoon and
my jaw dropped during the opening. This may have the most stunning
opening of any film, I certainly can't think of any other contenders at
present, with crazy music, a landscape out of a dream, soaring birds of
prey and a great big steam train. The camera and hence the audience are
everywhere, this side, that side above, below and even in the smoke
from the engine. Previously there has been some set up to accompany the
credits and then we are away. This film does not let up so if it is not
non-stop action you are after you had best avoid. For all sensible folk
this is a mind blowing exercise in action cinema. Loud, violent and
stunningly shot this is awe inspiring stuff and with a comic edge too.
I spent half the time with my mouth agape and rest with a broad smile.
I have heard some criticise this for lack of storyline and certainly
there is minimal narrative flow here as we are sped on by sheer
excitement and amusement. Fantastic entertainment on a massive scale.
Large screen viewing recommended.