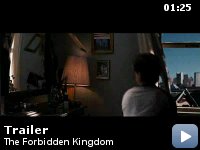 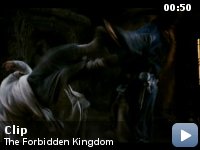 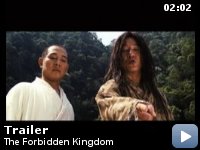 A discovery made by a kung fu obsessed American teen sends him on an adventure to China, where he joins up with a band of martial arts warriors in order to free the imprisoned Monkey King.

Storyline
An American teenager who is obsessed with Hong Kong cinema and kung-fu classics makes an extraordinary discovery in a Chinatown pawnshop: the legendary stick weapon of the Chinese sage and warrior, the Monkey King. With the lost relic in hand, the teenager unexpectedly finds himself traveling back to ancient China to join a crew of warriors from martial arts lore on a dangerous quest to free the imprisoned Monkey King.

The Monkey King
/
The Silent Monk

Taglines:
The battle for eternity is the fantasy of a lifetime. (Canadian poster)

Continuity:
When the Jade Warlord slams the Silent Monk onto the Monkey King's altar at the end, it cuts to a different shot and the Silent Monk disappears, reappearing in the next shot.

Lu Yan:
[the Silent Monk does a Praying Mantis stance]
Praying Mantis! Very good… for catching bugs! But not Tiger!
[does a Tiger Stance]


In gong-fu movie lore, it has long been foretold that one day two of
the greatest stars of the genre would come together one day on the
screen. That day has come in "The Forbidden Kingdom," which stars two
of the latest and greatest stars of the martial arts movie genre –
Jackie Chan and Jet Li.

Combined, both men's careers span over 30 years and over 100 movies, in
their native China and here in the United States; that's a lot of
kung-pow kicking and punching. They both decided to make their American
crossovers around the same time during the 1990s – Chan's first hit in
the U.S. was "Rumble in the Bronx" (1995) and became a mega-star due to
the "Rush Hour" movies, while Li made his American debut as the lead
villain in "Lethal Weapon 4" (1998), received his first
English-speaking starring role in "Romeo Must Die" (2000), and earned
critical respectability with "Unleashed" in 2005.

Now, we're at "The Forbidden Kingdom." I like both stars. My friends
and I, like many other martial arts movie fans, have eagerly awaited
this cinematic pairing for some time.

Starting in the present – 2008 – an American teenager named Jason
(Michael Angarano) who has an obsession with gong-fu movies is
magically transported back in time to ancient China by the long-lost
staff of the fabled Monkey King (Li, in one of two roles in the film),
where he learns he has been chosen to return it to him. 500 years
earlier, the mischievous martial arts master Monkey King had been
imprisoned in stone by the Jade Warlord (Collin Chou).

On his journey, Jason comes across the drunken beggar Lu Yan (Chan, in
one of two roles in the film), who teaches him gong-fu so that he will
be able to take on the Jade Army. They are also aided by The Silent
Monk (Li, in his other role) and the orphan assassin Sparrow (Yifei
Liu). There is one particularly funny sequence where Lu Yan and The
Silent Monk fight over how to train Jason to defend himself – with Lu
Yan's unorthodox methods and the Monk's more traditional approach.

"The Forbidden Kingdom" is one fast-paced and entertaining martial arts
flick that keeps you watching just because of the
know-it-all/seen-it-all before charisma of the star talent. With nods
aplenty toward the martial arts movies of yesteryear (chiefly
old-school Shaw Brothers movies, as well as plenty of helpings of
Taoist philosophy and the Jeet Kune Do teachings of Bruce Lee), "The
Forbidden Kingdom" is perhaps what Quentin Tarantino has fantasized
about so much during countless cinema grind-house outings as an
impressionable teenager and later as an adult realized on the screen in
his "Kill Bill" films.

But Tarantino is nowhere in sight. Behind this production, is American
screenwriter John Fusco (who based the script on the epic story
"Journey to the West," which is cited as one of the four great novels
of Chinese literature) and American director Rob Minkoff (of "The Lion
King"). This production, put simply, is probably the best combination
of American-Chinese talent since "Enter the Dragon" way back in 1973.
Choreographing the fights with plenty of wire-work and CGI pizazz is
Woo-ping Yuen, known for his work with both Chan and Li, as well as
"The Matrix" (1999) and "Crouching Tiger, Hidden Dragon" (2000). It's
pretty impressive that although it's fairly obvious that wires are
being used in the fight scenes, it doesn't really take away from the
action like it often tends to in American features, but actually
enhances their intensity here.

I got a lot of enjoyment from watching "The Forbidden Kingdom" and
watching the magnificent grace of Jackie Chan and Jet Li. Despite
occasional script deficiencies, I found this picture working from the
opening credits, which was a sure sign that what was about to come
would surely satisfy the martial arts movie fan inside of me. For many
martial arts movie fans, "The Forbidden Kingdom" may perhaps be the
movie they've been waiting for since the untimely passing of Bruce Lee
35 years ago.