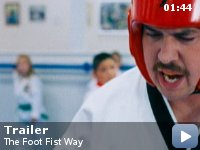 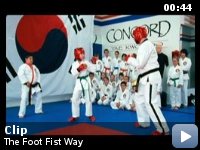 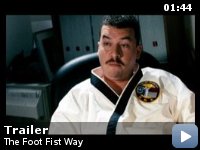 An inept karate instructor struggles with marital troubles and an unhealthy obsession with fellow karate enthusiast Chuck "The Truck" Williams.

Storyline
Small town Tae Kwon Do instructor Fred Simmons relishes the power that comes from being the king of a small kingdom. A former champion, Mr. Simmons fancies himself one in the same as his hero, Chuck "The Truck" Wallace, a B-movie Martial Arts film star. Mr. Simmons openly boasts about his self-proclaimed status as "king of the demo" [Tae Kwon Do demonstration], even though he can't nail one to save his life. His only vulnerability lies in his adoration of his wife Suzie – a weakness that comes bubbling to the surface when Mr. Simmons discovers Suzie has cheated on him with her new boss. When Suzie leaves him, Mr. Simmons finds himself slipping into a crushing downward spiral. He struggles to keep "the power" by abusing anyone who challenges him. After losing students and making a fool out of himself, he finds allies in Julio Chavez, his nine-year-old apprentice…

Fred Simmons:
Boom got him. Gotcha didn't she rick?

Rick:
No, i was just doing what you told me to do.

Fred Simmons:
Okay, everyone's entitled to their own opinion. Rick, you think you can beat this combination? Marge & I here think differently don't we Marge?

Fred Simmons:
Okay Rick, I want you to come at Marge with everything you got no holds barred full contact. & I'm gonna warn you. I don't think you're gonna like how this ends hotshot.

A funny, although somewhat disappointing, film


I am always amazed at how hard it is to make a decent low budget
comedy. One would think that comedies and dramas would be the easiest
genres to film on a limited budget, yet time and time again, they fail
to deliver.


After hearing such amazing buzz for The Foot Fist Way, I was very
excited to see if this "little comedy that could" would actually
deliver. The result, however, was a very mixed bag.

The acting is very good for a film of this caliber, except for the
woman who plays the adulterous wife. During several scenes at the
beginning of the film, she is shocking bad, and it takes away from the
believability of the scenes.

The comedy, when it hits, is very funny… but it is quite obvious why
Will Ferell has put so much praise on this film. It is essentially a
very vulgar no-budget version of one of his films. The Tae Kwon Do
instructor is essentially playing Will Ferell, playing this character.
At times, he's very funny – but its nothing groundbreaking.

The film really disappoints in its pacing. Every outcome is extremely
obvious, and many scenes go on for way too long. One scene in
particular, in which the instructor tries to come on to a female
student, really outlasts its welcome and goes from mildly amusing to
aggravating by its end. The final scene, meant to feel somewhat
victorious, comes off flat and humorless.

The Foot Fist Way does deliver some very good belly laughs from time to
time, but sadly comes out like most low-budget comedies. Its sad to
say, but had this project been given a Hollywood budget, a script
polish, and some stars, it would have been much more fun.

Skip it in theaters. Give it a rental if you're intrigued.