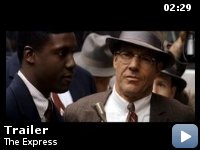 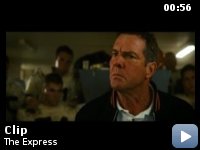 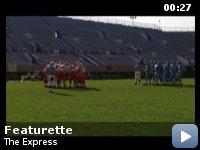 A drama based on the life of college football hero Ernie Davis, the first African-American to win the Heisman Trophy.

Storyline
This biopic focuses on the relationship of Ernie Davis (1939-1963), a gifted African-American athlete, and his coach from 1958 to 1962 at Syracuse University, Ben Schwartzwalder (1909-1993). Schwartzwalder recruits Davis with the help of All-American running back, Jim Brown. The civil rights movement is gaining steam; Davis experiences prejudice on campus, in town, and on the field, sometimes from teammates. How he handles it and how he challenges Schwartzwalder to stand up for his players provide a counterpoint to several great seasons that lead first to a national championship and then to the Heismann Trophy.

Factual errors:
At the very start of the movie, in the huddle of the first play the audience witnesses during the Texas game, you can clearly hear the quarterback say the play and he says it is a Shovel Pass, but when the play is run it is in fact a direct hand off to Ernie Davis not the shovel pass that was called.

Ernie Davis:
21 straight lines five yards apart. That is a football field. But there are other lines you don'T see that run deeper and wider. All the way through the country, and aren't part of any game.


The Express was one of the best sports movies I have seen. It tells the
story of Ernie Davis, who was the first African American to win the
Heisman Trophy and his relationship with his coach, Ben Schwarzwalder.

It is set in the late 50's where there was still a great deal of
prejudice against African Americans, even in the northern states where
segregation was not overt. Ernie's optimism and willingness to be the
best football player he can be, not just the best African American
football player was portrayed perfectly by Rob Brown. He was inspiring
and you couldn't help rooting for him to succeed.

Ben was a crusty, set in his ways coach, who couldn't see beyond
winning the game. Ernie helped him see that a football team is made up
of individuals who have to pull together to achieve their goals. Dennis
Quaid is an excellent actor, who can say so much with just a smile or a
raised eyebrow. He is so natural, it is as if he isn't acting at all.
Dennis & Rob have a very good chemistry, and they made every scene
believable.

The Express was similar to the Rookie, another great film that Dennis
Quaid starred in. Both films had just the right amount of drama, set
off with little bits of comedy to relieve the tension.

At the showing I attended, the audience was very moved by the film
because when it was over, there was much applause, something you don't
hear much in movies these days.

You don't have to be a football fan to love this movie. I highly
recommend it.