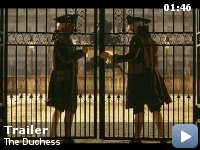 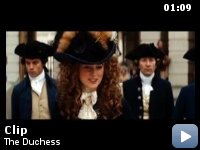 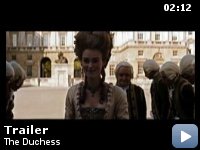 A chronicle of the life of 18th century aristocrat Georgiana, Duchess of Devonshire, who was reviled for her extravagant political and personal life.

Storyline
Georgiana Spencer became Duchess of Devonshire on her marriage to the Duke in 1774, at the height of the Georgian period, a period of fashion, decadence, and political change. Spirited and adored by the public at large she quickly found her marriage to be a disappointment, defined by her duty to produce a male heir and the Duke's philandering and callous indifference to her. She befriends Lady Bess but finds she is once again betrayed by her husband who wields his power with the three eventually living uncomfortably together. Against this background, and with the pressures of an unfaithful husband, strict social pressures and constant public scrutiny, Georgiana falls passionately in love with Charles Grey, a rising young Whig politician. However, despite his ongoing liaison with Lady Bess, the Duke refuses to allow her to continue the affair and threatens to take her children from her.

Taglines:
There were three people in her marriage

Factual errors:
Georgiana, Duchess of Devonshire was born in 1757. Charles Grey was seven years younger, born in 1764. According to the subtitle, the scene depicting a wager among the young ladies over a footrace between Charles Grey and other young men was held in 1774. Georgiana was correctly seventeen at the time, but Charles Grey was ten. He would have been a boy, not the young man about to attend Cambridge portrayed in the film.

Bess Foster:
[watching children]
Up and down, up and down. Why can't we recover like that?

Georgiana, The Duchess of Devonshire:
It's too far to fall now.


The Duchess is a superior slice of costume drama which manages to craft
interesting, multi dimensional characters and an involving storyline
from the well worn confines of the genre.

Keira Knightley plays a very similar role to the one she played in
Pride and Prejudice, a feisty, modern woman trapped in a male dominated
society. However, whereas Lizzie Bennett's heart and character inspires
affection, the Duchess of Devonshire's fosters only reproach and
punishment from her traditional and patriarchal husband. Her
performance is a standout and demonstrates why she is so highly rated
in the face of many disappointing roles in other films. She brings both
strength and weakness to the character. Able to deliver withering put
downs at her husband and others, whilst showing the pain of her
loveless marriage etched into her face.

If Knightley is the lynchpin of the piece then it is Ralph Fiennes that
elevates it above a crowded genre. Resisting the temptation to play his
character as evil, instead he simply plays him as a man of his times.
In Fiennes' hands the Duke feels no need to win any bouts of verbal
jousting with his wife as he is secure in the knowledge that, as a
husband, he is in complete control of the relationship. The Duke also
clearly sees very little wrong in his treatment of his wife and acts,
as he sees it, in a logic manner making the whole film feel more
believable and, as a result, tragic.

In terms of the cast the only misstep is Dominic Cooper as Charles
Grey, who lends the wide eyes of a political dreamer but doesn't have
convincing chemistry with Knightley and plays one of the more one
dimensional characters in the piece. However Hayley Atwell impresses by
playing her character so well it is possible to describe her as
scheming, and manipulative as well as sympathetic and loyal without it
seeming a contradiction.

The film is deliberately paced so as to give characters and events time
to breathe, encouraging the mood that the marriage is a car crash in
slow motion, inextricably drawing all the characters further into the
muddled mess of their relationships. Overall it's a fully recommended
slice of real life costume drama that draws a multi layered drama full
of compellingly deep characters from what could easily have been a one
note story.

TagsEnglandUK
The Life Before Her Eyes
Snow Angels